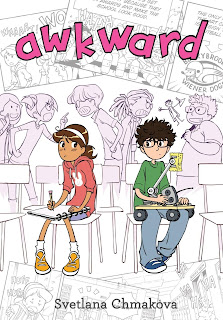 I came to read this book, Awkward, in a backward way. While judging books for the Excellence in Graphic Literature Awards, I got a copy of its sequel Brave. I read and very much enjoyed it, so when I came upon this book at the local library sale I totally snapped it up. I had read work by these books' author Svetlana Chmakova years before (the series Dramacon, which was more of a soap opera/romance set at comic conventions), and I very much was impressed at how she crafted characters and relationships. This book is similarly excellent, only in a middle school setting.

Awkward follows the exploits of Penelope (Peppi) Torres, a transfer to a new school who on the first day tries to stay below the radar but accidentally knocks over a geeky boy named Jaime. When people start to tease her that she is his girlfriend, she shoves him and runs away. This event opens a rift between the two, and it weighs heavily on Peppi because 1. she knows she should do the right thing and apologize, and 2. she thinks Jaime is a good guy and she (small spoiler) develops a crush on him. 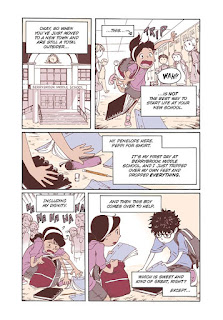 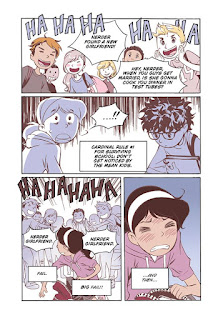 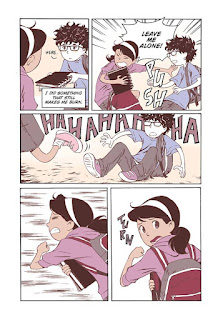 Complicating that awkward situation, the two also end up belonging to two clubs (Peppi the Art Club and Jaime the Science Club), that are actively hostile toward each other, playing pranks and getting into a competition where only one will get a table at the annual Club Fair. 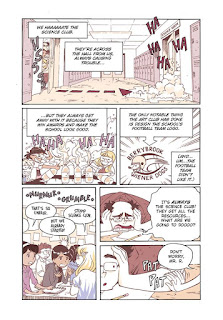 What makes all of these happenings work is that the characters in this book are vibrant and well defined. They are complicated and interesting, not playing into stock stereotypes and often offering up surprising insights. Also, there are a bunch of gags, funny expressions, and an overall light-hearted, fun tone about the everyday goings-on at school as well as the idiosyncrasies of people's relationships with the friends and family. I know that it's been a while since I was that age, but this book made me remember some of the tentative, confusing, and intense feelings that go with being a middle schooler. I loved getting to know the characters in this book, and the plot, with its competitions and over-the-top hi-jinx, is suitably fun and heartfelt.

This book's author Svetlana Chmakova has won a slew of awards and accolades for her works. Along with this series and Dramacon, she also has published a supernatural themed series called Nightschool. She speaks more about her work and career in this interview.

All of the reviews I have read of this book have been glowing. The School Library Journal's Mike Pawuk called it "another shining example of kids comics done right," and added, "It’s got plenty of heart and soul." I agree with Amanda M. Vail who wrote, "Once you pick up Awkward, you’ll have a hard time putting it down." Johanna Draper Carlson wrote, "I enjoyed spending so much time with Peppi and her classmates, seeing them grow and learn. Events resolve in surprising but rewarding ways, as the kids get to know each other as people instead of stereotypes."

Awkward was published by Yen Press, and they offer more info about it here. Like I wrote, this book has one sequel already, Brave that I will be reviewing in the near future, and a new one coming soon entitled Crush.
Posted by Stergios Botzakis at 12:00 PM