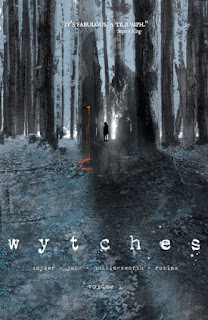 First, before I review Wytches, Volume 1, I have to admit three things:

1. I have been meaning to review this book here for a couple of years now, but I have always put it off. I wanted the review to land on Halloween, but some other title always cropped up and I laid it aside. It got to the point that I even deleted the draft (that was at least two years old) and the jpeg image of the cover I had. I just gave up on reading and reviewing this book. Then, a new one-shot (Wytches: Bad Egg) came out that Derek and I planned to review on today's episode of the Comics Alternative podcast, so I decided to do a little homework and read up on this series.

2. I am not the biggest fan of horror comics (or horror books/stories in print form in general), mostly because I don't really get the thrill of being scared when I read all that often. I'd rather watch horror movies or shows. I do love monster stories though, and the visuals that go along with them are some of my favorites (in comics and otherwise).

The tale here follows the Rook family, which consists of Charlie, the dad who writes children's books, Lucy the mom who was paralyzed from the waist down in a car accident, and Sailor, their daughter who survived a harrowing experience with a sadistic, psychopathic bully. Trying to start things fresh, they move to a town in New Hampshire, unbeknownst of strange things that are going on not only in the woods but in the town itself. 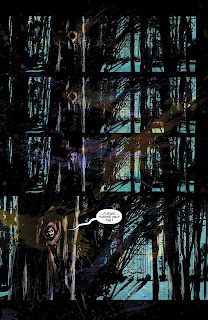 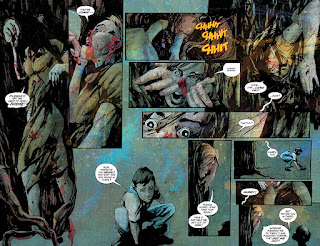 I hate to ruin anything that follows, so suffice it to say this story hits on pretty much any fear a parent, child, or paranoid person could have. This book is the definition of a page-turner, and I sped through it with an equal amount of anxiety and intrigue. The story is briskly told, the artwork gleefully grotesque, and the coloring adds dimensions of dread and despair. These are some great comics.

This book was a collaboration between writer Scott Snyder, artist Jock, and colorist Matt Hollingsworth. Snyder is best known for his work on DC Comics titles like Batman and Swamp Thing, but he also co-wrote (with Stephen King) the Vertigo series American Vampire. Jock is renowned for his cover work and also had a long run on Batman as well as a revival of The Losers. Hollingsworth is a veteran colorist with a myriad of credits. All of their work here contributed to a dark, atmospheric, truly frightening reading experience. Snyder speaks in this interview about his experience writing Wytches.

The reviews I have read about it have all been glowing. Trevor Van As wrote, "If you’re a fan of horror done right, without the cheap thrills, then Wytches is a must read." Emily Solomon gushed that "Snyder and Jock have revolutionized the witch mythology for a new generation of horror junkies." Victoria called it "fantastic and a must-read for graphic novel and horror fans." I also really enjoyed this review/article by Susana Polo, but be warned it contains spoilers.

Wytches was published by Image Comics, and they offer a preview and more info about the series here. This book features violence, profanity, and many disturbing images so it is recommended for mature readers.

A follow-up series is in the works, for publication in 2019.
Posted by Stergios Botzakis at 12:00 PM