In the Future, We Are Dead 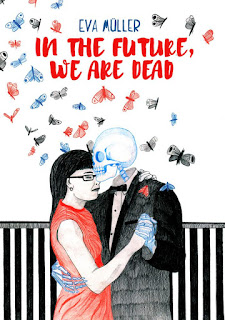 I got this book as part of backing Birdcage Bottom Books' Kickstarter for 2018. In the Future, We Are Dead is a collection of nine short stories about death. They are rendered in black, white, blue, and red, via color pencils, and I was quite taken with the artwork. It is mostly done in a realistic style, which combined well with the prose to create great effects. In the excerpt below, for example, it punctuates a thoughtful, philosophic moment with a hilarious, if dark, counterpoint. 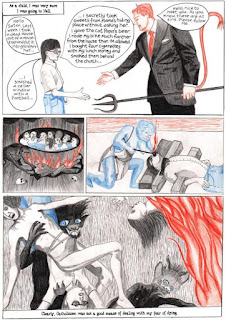 This book explores a topic that touches all of our lives, and I feel that Müller's comics are at once deeply personal and also surprisingly universal. I felt with her as she described the deep fears she felt as a child about death and the potential afterlife. Not only was she preoccupied by the potential terrible causes of death, including sickness, nuclear war, or grave injury, but she also wondered about what would happen after.

These various stories touch on different periods of her life, and it was fascinating for me to see just how her thinking transformed over the course of the book. She began to imagine the ghosts of her relatives in her grandparents' living room, which had formerly been used a place for viewing the recently deceased. 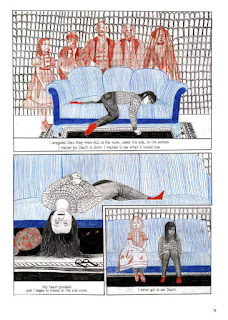 She pondered the fate of mummified Buddhists while she practiced  yoga and struggled with the corpse pose (Savasana). She thought about her relationship with an elderly neighbor and how personal and distant it was. She also explored her familial relationships, particularly at her father's funeral, and when she attempted to view her own life through the eyes of her brother. I found this book to be profoundly thoughtful, relatable, and personable. It is an impressive North American debut, a graphic novel that explores both life and death in excellent fashion.

You can learn much more about this book's creator Eva Müller and her work by visiting her website. I am looking forward to checking out more of her comics as they become available in the US.

All of the reviews I have read of this book have been glowing. Publishers Weekly concluded, "This reflective graphic novel looks the Grim Reaper in the face—and sees that he isn’t an enemy, after all." John Seven called it "a work of self-scrutiny that finds profundity by finding the commonality in what can seem so personal and singular to us." Robin Enrico called it "a strong North American debut for Müller as it showcases her artistic abilities and the breadth of her storytelling."

In the Future, We Are Dead was published by Birdcage Bottom Books, and they offer a preview and more information about it here. I also found another preview, featuring different pages here.
Posted by Stergios Botzakis at 12:00 PM