The Be-Bop Barbarians: A Graphic Novel 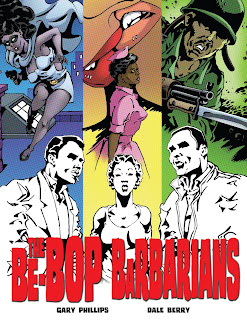 The Be-Bop Barbarians is a fascinating, gripping look at life in the 1950s for three African-American artists living in New York City. They are fictional figures, though they are based on real people, according to the book's introduction. The protagonists are Cliff, a light-skinned handsome man who passes for white in certain circles and who draws comic books (based on Matt Baker), Stef, who moonlights as a maid and domestic servant while drawing a romance comic strip for a black newspaper (based on Jackie Ormes), and Ollie, a veteran of the Korean War who publishes political cartoons under a pseudonym (based on Oliver Harrington). 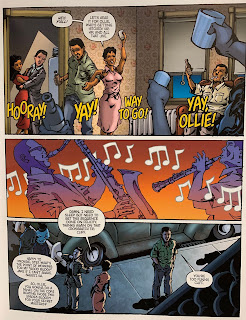 The three friends and colleagues are involved in civil rights issues that affect their daily lives. Cliff struggles to maintain various identities (and romances) as he works and travels about town. Also, he is on the losing end of a legal struggle with a publisher who is trying to steal the rights to a character he created. Stef struggles to make ends meet and also is conflicted by some of the racist attitudes she faces from those she works for. Ollie is married to a Korean woman, and while they await the birth of a child, they face harassment on numerous fronts. All three chronicle the disturbances, slights, and inequities they experience through their art, transforming them into something politic and motivational. Their bravery and creativity wins the day even though they face numerous obstacles and prejudices.

A book like this, woven from masked historical figures, runs a danger of reading like straight propaganda or being related in ham-fisted manner, but The Be-Bop Barbarians is a vivid and vital account of the hardships and unjust social realities of the day. The various plots are compelling, the characters strong and nuanced, and overall the book is an excellent piece of historical fiction. It made me care about the characters and also learn about the times the story was set. I was also impressed by how they wove together the three different tales into a cohesive, moving whole. Also on the positive side, I appreciated how this book introduces a new generation of readers to some important, often forgotten, comics artists from the past.

This book was a collaboration between writer Gary Phillips and artist Dale Berry. Phillips has penned several novels and has multiple and diverse credits in comics, including editing the conspiracy/noir collection The Obama Inheritance and co-writing the neo-noir/punk series Peepland, which was set in the 1980s. There is a six-page sequence in this book that features his prose without the illustrations, and I felt it was an effective narrative device. Berry has been drawing and creating comics since the 1980s, and he created the first graphic short story published in Alfred Hitchcock's Mystery Magazine's 60 year history. I very much liked his storytelling and how he altered his art style to (re)create the look and feel of the disparate art styles of the three fictional creators.

I was not able to locate many reviews of this book, but Molly Odintz called it "beautiful and moody, channelling the quiet desperation, simmering anger, and creative intensity of 1950s noir."

The Be-Bop Barbarians was published by Pegasus Books, and they offer more info about it here.