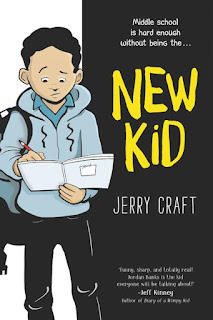 New Kid was recommended to me by fellow graphic novel aficionado Zach Barnes, and I am glad he turned me onto it. It is a rare book, in its view of a scholarship student going to a private school. Riverdale Academy Day School is a launching pad for success, and Jordan Banks's parents decide it is the best way for him to go. He's African-American, which puts in him in the minority at that new school, and he's really unsure if he belongs for many reasons. First, he wants to be an artist, and he feels that art school might be a better path for him. Second, he's from a family with modest means, and most of the students at RADS are super-rich patricians, some of whom have legacies there.

What really stood out to me about this book was how it depicted Jordan's various plights with humor, heart, and nuance. His parents want what is best for him, although they also have their disagreements about this situation. Jordan has to navigate a new space while dealing with racial and class issues. People often do not speak to him, and when they do they call him by the wrong name. Furthermore, he has to make new friends while also maintaining his relationships at home and making sense of both worlds. In part this struggle is embodied by the subtle transformations he makes each day as his dress and demeanor change over the course of the long bus ride to school. He has to assume several identities and navigate multiple realities, which this book shows in a way that drives home what many young people have to do in order to get by on a daily basis. 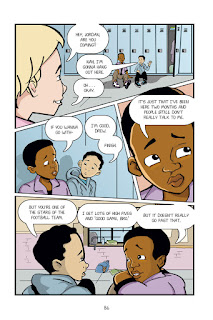 The book is laid out in multiple chapters, episodes that follow him across the school year. There are multiple plot threads, and overall I'd say the narrative is more observational than dramatic. But those observations are sharp, astute, and often heartfelt. I also very much enjoyed the sequences where we get to see Jordan's artwork and its humorous commentary on his life in and out of school. All of the characters are interesting and well portrayed as individuals who I enjoyed getting to know the over the course of the book, and I'd love to have another opportunity to revisit them in a sequel. I feel that this book has much to offer as food for thought and also as a keen and emotional look at teen life. It is excellent for reading and re-reading, and I cannot recommend it enough.

Jerry Craft wrote and drew this book. He has drawn multiple children's books and graphic novels in the past, and he is known for his work on Mama's Boyz, both as a comic strip and in four books. This article sheds light on his work on New Kid, as does this interview.

Every review I have read about this book has been glowing. Elizabeth Bird summed up, "More than just the sum of its parts, Craft has created a book with guts, that kids will want to read multiple times. Funny, whip smart stuff." Victoria Jamieson called it "tender and tough, funny and heartbreaking." Kirkus Reviews gave it a starred review that concluded, "An engrossing, humorous, and vitally important graphic novel that should be required reading in every middle school in America." Publishers Weekly also gave it a starred review that ended, "This engaging story offers an authentic secondary cast and captures the high jinks of middle schoolers and the tensions that come with being a person of color in a traditionally white space."

New Kid was published by HarperCollins, and they offer an audio excerpt, teacher guide, and more info here.
Posted by Stergios Botzakis at 12:00 PM