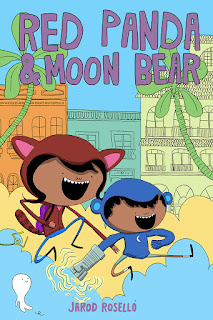 Red Panda & Moon Bear is a delightful book. It features a unique Latinx sister/brother superhero team. Both wear hoodies, Red Panda's giving her the strength of ten red pandas. Moon Bear possesses a magic crystal that he wields in a special gauntlet. Together, they defend their neighborhood from various menaces and solve mysteries. They face evil dogs, a ghost in a library, ice cream monsters, a nightmare, shape-shifting monsters from another galaxy, disappearing buildings, and scary trees.

Their adventures are fun and inventive, and I appreciate how they get through various situations not only by using their wits and sometimes their fists, but also by being empathetic and talking things through. They show that kindness and understanding can be effective for dealing with others and finding solutions to various dilemmas. 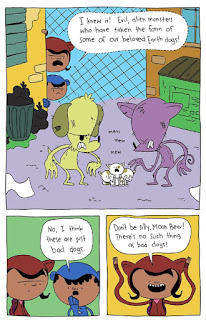 This book is fantastical in the best kind of way, with cool sci-fi, fantasy, and superhero elements woven throughout 11 chapters. And I love RP and MB's sense of adventure and cleverness. I think that perhaps the highest praise I have for the book is that I read it with my three-year-old, and he did not want to put it down. He not only insisted I keep reading each chapter, he even took it with him in his wagon when we went for a walk around our neighborhood. This book is enchanting!

When I asked him what he liked about it, he told me, "There's a mystery." "It's a little bit scary." And "I like Red Panda and Moon Bear (the characters)." So, there's something for everyone!

This book's creator Jarod Roselló is an artist, researcher, and educator who teaches creative writing at the University of South Florida. Although this book is his first for younger readers, he has published the graphic novel The Well-Dressed Bear Will (Never) Be Found as well as a bunch of shorter pieces. He has another graphic novel called Those Bears in the works for publication. He speaks about his work in this interview.

I was not able to locate many reviews of this book, but the ones I found were very positive. Cassie at Teachers Who Read called it "a perfect addition to the graphic novels in my classroom." It currently has a 4.71 (out of 5) star rating at Goodreads.

Red Panda & Moon Bear was published by Top Shelf Productions, and they offer a preview and much more here.
Posted by Stergios Botzakis at 12:00 PM