Is This How You See Me? 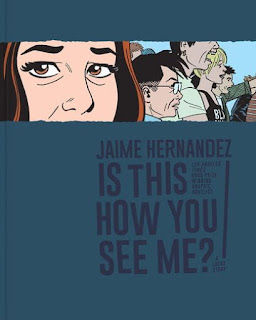 I've said it before and I'll say it again: Jaime Hernandez is one of my favorite comics makers ever, and I don't know how he keeps topping himself, but he's done it again. Is This How You See Me? is a book about a reunion. The Locas, characters Hernandez has been writing about since the early 1980s all convene 30 years later for a special concert of their old favorites and some of the new Turks who were inspired by them. It also features old friends and acquaintances coming back together, some happily and others not so much. What is phenomenal to me is just how vibrant and complex a quilt Hernandez weaves in a relatively short space in this book.

All of the major players here have aged, most have mellowed, and it is interesting to see how their lives have shifted over time. Of course, this book focuses much of the time on Maggie and Hopey, the on-again, off-again friends and lovers who were the primary focus of the classic Locas tales. Their adventures have always featured lots of personal drama and upheaval, and it is fascinating to see how that still plays out 30 years later. 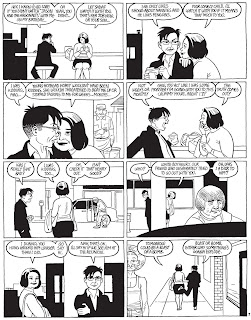 This book features a lot of juxtaposition. It hops back in forth in time to show characters then and now. It shows what the folks at the reunion are up to while also showing what their significant others are doing while left at home. And although a few things remain relatively the same, it shows the ocean changes the exist between then and now. Perhaps most strikingly for me was the difference between the sorts of trouble Maggie and Hopey can get into to. Their past run-ins with punks and drug dealers seemed almost quaint and fun next to the two episodes of hate they run into in the present, which were full of menace and danger.

One of the strong points is just how iconic and potent the illustrations are. Hernandez has honed his craft over the decades to be able to capture an emotion or deliver a visual zinger in economical fashion. There were multiple times I found myself poring back over pages to admire his characters and how he brings them to life via his artwork.

Another of the strongest parts of this book for me was its dialogue. There are a number of big crowd scenes where people are watching shows, catching up, or hanging out late night in diners, and their conversations are mundane, silly, pointed, and sometimes poignant. I know that comics work best when there is a playful, intentional interplay between the images and the words, and Hernandez shows he is a maestro of drawing, writing, and also marrying the two.

I feel that I have a difficult time doing this book justice, because it does so much. It delivers quality slice-of-life type tales while also showing what happens across a lifespan. It is funny, sometimes sad, and very rewarding. There are lots of pay-offs for longtime Love & Rockets readers but also quite enough context to entertain and engage those new to this universe. I cannot recommend this book enough.

The reviews I have read of this book have been glowing. Edwin Turner wrote, "It's fascinating too to see how naturally Hernandez has realized the aging of his characters, as if they were not drawings on a page, but rather real people." In a starred review, Publishers Weekly concluded, "While longtime fans will discover extra levels of joy and regret in this installment, even those who pick this up as their introduction to the series will be moved by its tale of growing older without necessarily growing up." Hernandez speaks about his work on this book in this interview.

Is This How You See Me? was published by Fantagraphics, and they provide a preview and much more here. It features profanity, some violence, and sexual content, so it is recommended for readers mature enough to handle those things.
Posted by Stergios Botzakis at 12:00 PM

Labels: 2019 Favorites, aging, Is This How You See Me, Jaime Hernandez, LGBTQ, Love and Rockets, mature readers, punk rock, relationships