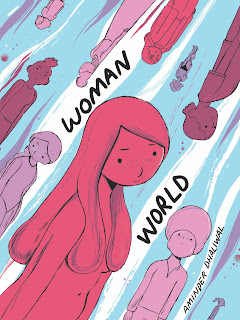 Imagining a world where all the men have ceased to exist and women are left to run everything has been done in comics form before, but this book Woman World does it with a singular voice and a great sense of humor. The comics in this book were originally published online, originally on Instagram. They follow the adventures of a small band of women living in a future where all the men have died due to some genetic disease. They choose their town name and create a flag to feature the most empowering symbol they could think of: Beyoncé's Thighs. That choice should indicate just how this book mingles a feminist viewpoint with humor and a pop culture sensibility.

As the book progresses through a series of 2-3 page episodes we meet a number of this world's denizens. Among them there's Mayor Gaia who walks around naked because she likes the feel of the cool breeze on her underboob.

There is Emiko, who has grown up in a world without men, and upon seeing a dated movie, comes to think of Paul Blart: Mall Cop as the embodiment of masculinity. There is also Grandma, who remembers things as they used to be and finds people incredulous at what she describes. 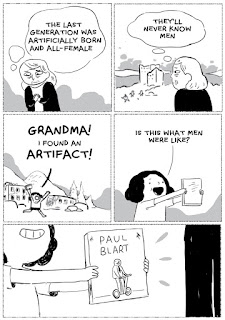 Each woman has a distinct personality and role, and through their stories and brief episodes a larger tapestry of this world appears. It is a somewhat tragic place, where people are striving to keep civilization going on their own terms, but always tinged a sense of (dark) humor.

The artwork, as you can see in the excerpts, is spare but very expressive. I love how people's personalities and emotions are conveyed in straight-forward fashion. I also think that it juxtaposes well with all the verbal interactions and cultural references. The beats work just as well in human moments as they do in delivering laugh-out-loud gags.

This book is the creation of Aminder Dhaliwal, an animator who has worked for a number of major studios. Woman World is her graphic novel debut, and it was nominated for a 2019 Ignatz Award. She speaks about her work on WW in this interview. She still regularly publishes new comics on Instagram.

All of the reviews I have read of this book have been positive. Etelka Lehoczky called it "a remarkably sly and devastating critique of patriarchy. " Phillipe Leblanc wrote, "While the premise sounds depressing and bleak, the book is far from being a dark somber affair. Dhaliwal balances her dark premise with the precise amount of levity and wit to create wonderfully comedic situations." Publishers Weekly added, "Women’s creativity, sexuality, and fearlessness are unleashed by Dhaliwal’s end of days."

Woman World was published by Drawn & Quarterly, and they offer a preview and more here.
Posted by Stergios Botzakis at 12:00 PM