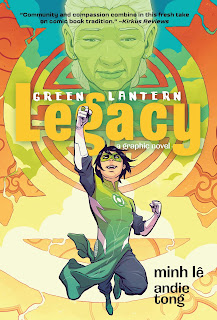 Last year, DC Comics started an imprint that published YA book versions of their characters written by prominent YA authors. I read one of the first books, Mera: Tidebreaker, because I like the character and was interested to see how these books looked. I really enjoyed it, and so I turned to another book I have heard good things about, Green Lantern: Legacy. I think it helped me that I have a familiarity with the Green Lantern Corps and its complicated comic book history, but I don't think it would be a necessity for a new reader just checking out this book. What I found here was a very compelling story that left me yearning for more. Its foundations lay in a familiar, human story, which I think helped sell the superheroics better. 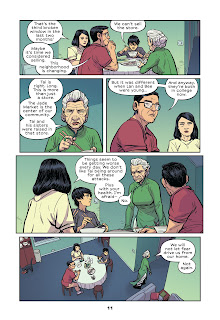 This book's protagonist is Tai Pham, a 13-year-old boy of Vietnamese descent who lives and works with his family in their market in Coast City. This market is one of the cornerstones of the Vietnamese-American community, and it is frequently a target of racist attacks. His grandmother is a very prominent figure in the community, and when she dies he learns that not only was she a Green Lantern, one of the greatest protectors of the Earth, but her power ring has chosen him as its new bearer. That means that a huge burden has been placed on his shoulders, and he has to learn how to deal with it. 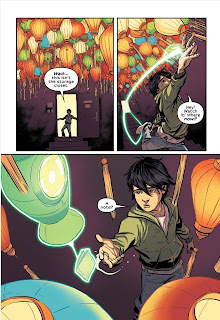 However he does not have to go it alone. He gets mentoring from veteran Green Lantern John Stewart, and also receives support from two of his close friends, who form a sort of "Scooby gang." Much of this book focuses on him finding his footing while also dealing with the overtures of billionaire Xander Griffin, who wants to gentrify Pham's neighborhood. I very much appreciated how unique this Green Lantern tale was, with Tai incorporating his cultural heritage not only into his costume but into how he exercised his powers. I found much to celebrate in this book.
Although I found this book very compelling and could not stop reading it, I also felt in hindsight that it is only so much prologue. It spends a long time setting up this character and his world, but in the end it seems more like the launching point for a series rather than a complete journey on its own terms. Certainly, I'd be up for more adventures of Tai (as far as I can tell, no sequel is of yet forthcoming), but I was a bit disappointed when this book just suddenly ended. Still, if the worst thing about a book is that it left me wanting more, that's not a bad thing.
This book was written by Minh Lê and drawn by Andie Tong. Lê is the author of a number of picture books, most notably Drawn Together, a multiple award-winner illustrated by Caldecott Medalist Dan Santat. As far as I can tell, this is Tong's debut graphic novel. His artwork here is typical  of superhero comics, and he excels at capturing people's facial expressions and energetic postures. I think this style especially pops thanks to the admirable coloring by Sarah Stern. Lê and Tong speak more about their work on this book in this preview.
All of the reviews I have read of this book have been positive. Kirkus Reviews concluded, "Community and compassion combine in this fresh take on comic-book tradition." Tim Chu wrote, "For the middle school reader, this graphic novel is a quick read that can open up a new universe of stories." There are more reviews at Goodreads where this book currently has a 4.20 (out of 5) star rating.
Green Lantern: Legacy was published by DC Comics, and they offer a preview and more about it here.
Posted by Stergios Botzakis at 12:00 PM