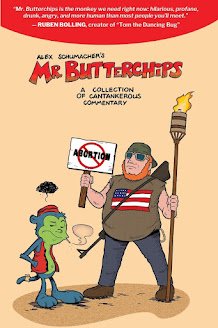 Mr. Butterchips is an interesting character, a monkey who aspires to be a stand-up comedian but who is largely relegated to make ends meet by partnering with an organ grinder. His job brings him into contact with a wide cross-section of people, making a sturdy platform for him to express his cantankerous views of social conditions, politics, popular culture, and all sorts of other matters. The first half of the book is episodic, in the vein of a weekly comic strip. And I was pretty amused to see how he tackles contemporary hypocrisy and injustice through comedic commentary, targeting things like "the war on Christmas," pro-lifers, big pharma, Comicsgate, and anti-vaxxers. 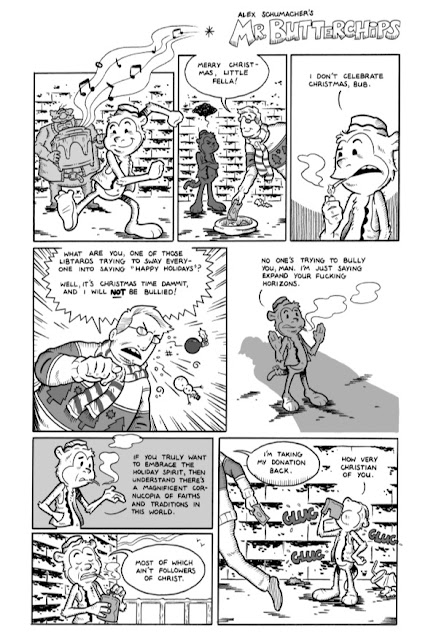 The second half of the book is a single, sustained narrative about Mr. Butterchip's misadventure with controlled substances in the streets (and sewers) of San Francisco. This story is more surreal, reminiscent of underground comix, with the city and its denizens being the butt of the jokes. I have only been to SF once, so I might not get all of the "in" humor, but I was still entertained by the tale, which also has a few mild suspense elements.

One of the best features of this book to me was seeing how the character, setting, and situations evolved over time. At first, the episodes are given to finding a tone and also establishing the character, which has it fits and starts with mundane things like girlfriend trouble and struggling to make rent. Over time, Mr. Butterchips develops more of a voice and the targets of its satire become more pronounced. By the time I got to the large story that ends the book, I felt a familiarity with things that made the plot hum. It was a lot like reading old volumes of comic strips and seeing how they grow into themselves. I'd be interested to see if there will be more adventures with this acerbic primate in the future.

These comics were created by Alex Schumacher, and most of them appeared monthly in Drunk Monkeys. He has completed a number of projects, including the webcomic Decades of (in)Experience and the self-published print collection Defiling The Literati. He speaks more about his work and career in this interview.

I was only able to find one review of this book, but it was very positive. Aaron Iara wrote, "Our news feeds and social media are chock-full of people arguing and discussing the issues of the day. However, hearing these arguments from a heated drunken monkey is so much more fun." He summed up by recommending "Mr. Butterchips to fans of political cartoons, boisterous stand-up comedians, and off-beat comic books."

Mr. Butterchips was published by SLG, and they offer more info about it here. This book features profanity, adult themes, drug use, and some sexual situations, so it is recommended for readers mature enough to handle those things.