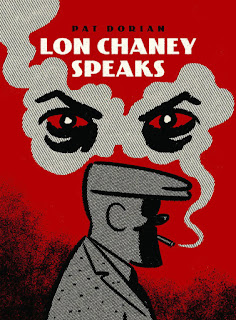 Lon Chaney was notoriously private during his life, once even stating, "Between pictures, there is no Lon Chaney." This book, Lon Chaney Speaks, takes a shot in filling in some of the gaps about his private life, but as is written in the author's note that opens the book, it is more of a "imagined biography." 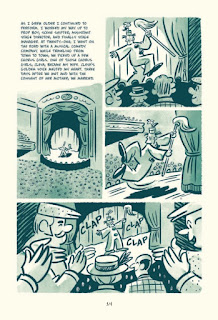 For those who don't know, Lon Chaney was an actor who began working in vaudeville, transitioned to silent movies, and finally made his speaking debut in a movie just before he died. He is renowned as "the man of 1,000 faces" for his pioneering make-up and special effects work. He was famous for portraying monsters and other gruesome creatures in his films, most notably The Hunchback of Notre Dame and The Phantom of the Opera. This book recreates movie posters for most of his films and also provides adaptations for his more famous roles. It also portrays events from his private life, including a rocky first marriage, an uneasy relationship with his son Creighton (later known as Lon Chaney, Jr.), and a happier second marriage. It also shows behind the scenes glimpses of how he slowly built his career into one of the most notable in Hollywood history.

This book is a clear labor of love that is very well researched and referenced. I adore the scenes and adaptations of the films, and the personal moments are all well staged as executed in terms of portraying strong characters and memorable events.The bold storytelling is reminiscent of the art style often employed by illustrators of the day (especially Syd Hoff), which adds to the historical tone of the story. A variety of colors are used, though each vignette is rendered mono-chromatically, which helps with shifts in time and space as well as indicates what is "real life" and what are movie scenes. I am a big fan of comics, old Hollywood movies, and monsters, so this book is right up my alley. It's gorgeous and informative, a must have for any monster or movie fans who are into comics.

This book's creator Pat Dorian is a filmmaker and cartoonist who has worked on high-profile projects for AMC and Adult Swim. He also teaches animation at the Pratt Institute. This book is his graphic novel debut, though he began the project as two mini-comics titled "Lon Chaney Talks."

All of the reviews I have read of this book have been full of praise. In a starred review, Kirkus called it a "dazzling debut" that "captures the voice and soul of Lon Chaney." Publishers Weekly called it a "spirited homage." Steven Thompson wrote, "It capsulizes his life just enough. He’s depicted as a less than perfect man, getting along as well as he can in a less than perfect world."

Lon Chaney Speaks was published by Pantheon, and they offer a preview and more here.