I have noted that these days are the Golden Age of Comics, as there are so many different genres, topics, and audiences being catered to by publishers. I am surprised not only what's out there but also what I miss, which includes this relatively new series of nonfiction graphic novels aimed at upper elementary readers. Thus far, there are two books in Seen: True Stories of Marginalized Trailblazers, one published in 2020 and the other this year. I like their size, small enough to pop into a pocket, and price-point, $5.99. They also have pretty extensive teaching guides, questions, and prompts as back matter, which seems to promote these books for classroom use. "But are they any good?" you might ask. Stick around and see what I think! 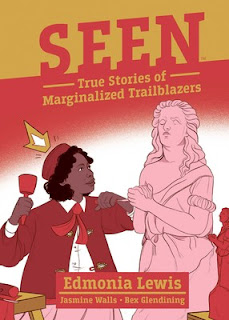 The first book from this series focuses on Edmonia Lewis, an internationally-renowned sculptor of mixed heritage. She was born in upsate New York, to a Mississagua Ojibwe mother and African-American father, and she lived from 1847-1907. She learned to be an artisan from her mother's side of the family, making and selling shoes and other household items. While contending with much adversity in terms of family tragedies, racism, and sexism, she attended school and university, both which were not really promoted for women, let alone Black women. She also ended up being trained in sculpture, though she had to travel to Italy to become established. One of her most acclaimed pieces, The Death of Cleopatra, is heavily featured here. To be honest, I had never heard of her before I read this book, and I hope it will work to make her less obscure.

This book was a collaboration between relative newcomers to the comics field, writer Jasmine Walls and artist Bex Glendining. They both speak about their work on this book in this interview.

The reviews I have read about this book have been mixed. Sara Smith wrote that she did not "feel that the creators have embraced the graphic narrative format, but that this was a more complex picture book." Jennifer Wharton wrote, "The unique subject matter, accessible art, and extensive resources for teaching in the back (they include educational standards, a multiplicity of questions on the art and subject, and educational activities) should make this a stand-out title." 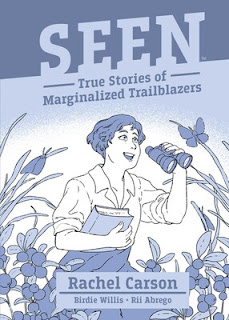 Rachel Carson, the subject of the second biography in this series, was more well known to me. She was the author of Silent Spring, a book that examined the harmful effects of pesticides, and a key early figure in the environmentalist movement. She started her career as a marine biologist and writer who spent a long term at the U. S. Fish and Wildlife Service. She published multiple books about biology and the environment, and she ended up becoming a very important public intellectual who helped direct government policy. 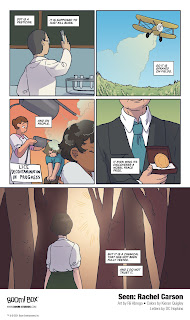 This book was a collaboration between writer Birdie Willis and artist Rii Abrego. In terms of comics, Willis has written a number of Over the Garden Wall stories. Abrego has drawn a number of comics for various publishers and has also drawn a graphic novel titled The Sprite and the Gardener due to be published later this year.

Most of the reviews I have read about this book have been positive. In a starred review for Booklist, Sarah Rice called it "an ideal choice for tweens and teens with an interest in science or anyone looking for an introduction to Carson." As of this review, it has a 4 (out of 5) star rating on Goodreads.

Looking at both books shows some obvious commonalities. Both extensively lean on narration and captions to convey information. At times, this makes it feel like the words are more important than the illustrations in steering the story, and that these are more picture books than graphic novels. Still, I really like the illustrations in both, and I feel that they would be engaging for younger readers.

Both books contain a lot of information, but they vary in how much they convey personality. In addition to her many accomplishments, the Rachel Carson book also pays particular attention to her lifelong relationship to Dorothy Freeman, who was her neighbor and frequent correspondent. Their friendship is a close one, which may or may not have been romantic. This book captures that ambiguity, especially in a few wordless sequences where a good deal of emotion is implied. I think this second book did a better job of depicting Carson as a person. In the Edmonia Lewis book, her playful, comedic side is described a number of times but never really shown. The different time periods and existing primary documents mean that there is only so much to draw from, and the result is that one book feels a bit more personal than the other.

Both books are pocket-sized, and relatively inexpensive for color graphic novels. They are pretty short, about 60 pages each, and with all the teaching material built into the books, I feel like these might have been published to be bought up and used as class sets. Certainly, the subjects of these books would are worthy of study, and these books would be a handy way for both students and teachers who might be unfamiliar with the format of graphic novels to get acquainted with it. I am pretty eager to see if this series continues, and who else might be featured in future volumes.

Both books were published by BOOM! Box, and they offer more info about them here and here.