This Is How I Disappear 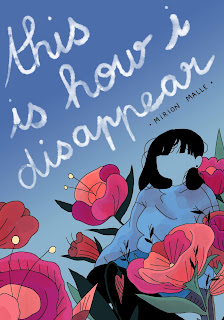 This Is How I Disappear is a powerful, moving, and important book about dealing with depression. Its protagonist is Clara, an over-worked 30-year-old woman who is still dealing with the fallout of a sexual assault that happened in her 20s. Her work as a marketing assistant for a publisher is not very rewarding, especially with her boss David's thoughtless and passive-aggressive behavior. Clara also is trying to write a draft of a verse novel, but she is dealing with writer's block and crises of confidence in her abilities. I could really relate to that last part, and her dread of missing deadlines was as palpable as the rest of the trauma and stressors she faces. 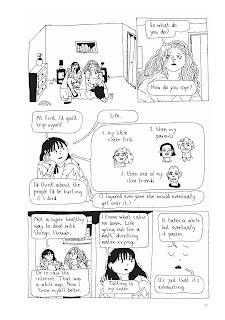 Things appear to look up when she meets a friend named Alexa, who is dealing with her own issues with a man she dated, and it seems like she might be someone to confide in and trust. But, Clara really is not up to helping anyone, as she is not dealing with her own pain and suffering, and it is harrowing to watch her sink further into isolation and despair. 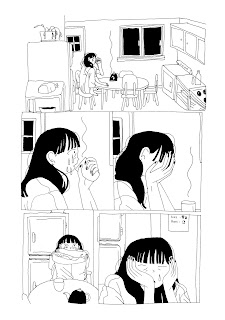 This book excels at capturing the feelings and behaviors associated with depression, and the artwork really conveys emotion and tone in a variety of ways. I was impressed by its wordless passages, the way that showing faces and gestures can say so much and communicate intensity. 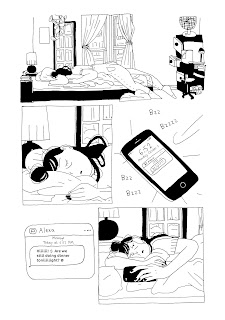 Much also gets communicated via depictions of social networking, and I thought that the contemporary look at life and mental health is incredibly well detailed. Clara's friends really don't know how to relate to her, and she starts avoiding them and really causing some concerns. I do not want to spoil the resolution of this book, but I will say that it ends on a hopeful note, though it does not pretend that what Clara is dealing with is easily solved. Although it contains a number of painful and difficult behaviors as well as discomforting events, I really appreciated this book. It is beautiful and moving, and the artistry used to show personal interactions and sorrow is masterful.

This book was created by Mirion Malle. She has published a number of graphic novels, and the only other one available in English right now is League of Super Feminists. This book was translated into English by Aleshia Jensen and Bronwyn Haslam. Malle talks about her work on This Is How I Disappear in this interview.

All of the reviews I have read about it have been positive. Publishers Weekly wrote that "this low-key look at life in recovery has a disarming simplicity and bracing sincerity." Madeleine Chan called it "a frank look at modern millennial survival and may pull you into an existential dread — in a good way." Jeff Provine opined that it "discusses burnout and coping in a way that is rarely seen in literature."

This Is How I Disappear was published by Drawn & Quarterly, and they offer a preview and more information about it here.