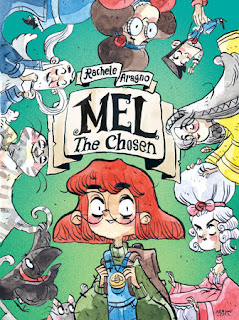 Mel the Chosen is a book about Mel, a girl who is tired of decisions being made for her. She wants to grow up so that she can make her own choices and be taken seriously. When she finds herself in the presence of three magical creatures who inform her that she is the one who is ordained to defeat the dreaded Malcape, she is excited to have a purpose. But she also quickly blanches at the constraints of being "the Chosen One," as her ability to make her own choices is restricted by the terms of her quest. Also, she finds that Malcape has a way of sensing and twisting a person's wishes, making him a very dangerous adversary.

What makes this book exceptional is two things: First, Mel's character is well defined and interesting. She is not the typical, vanilla "do-gooder" type, but a skeptical, savvy, and out-spoken soul who makes for an interesting protagonist. Second, the artwork, a combination of line drawings with watercolors makes for some excellent atmosphere as well as character designs. The magical creatures seem appropriately otherworldly. The magical realms are strange, beautiful, and menacing. The characters are expressive and feature a wide range of emotions and feelings. 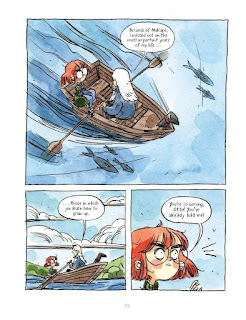 There are plenty of books that use the trope of "outsider who is an exceptional being in a world parallel to our own," but this one plays with the conventions and makes them fresh and interesting. Also, the drawings are gorgeous to behold and revisit. I very much enjoyed reading this book and think that it would be very popular with a middle grades audience.

Rachele Aragno created this graphic novel, which was originally published in Italy as Melvina, and translated into English by Carla Roncalli Di Montorio. It is her debut graphic novel, and she wrote in an afterward that she would love to revisit this world and check in with Melvina when she gets older. She speaks about her work on this book in this interview.

All of the reviews I have read of it have been positive. Ryan Sonneville called it "stunning" and  "a worthy addition to any library." Publishers Weekly wrote, "A sometimes bewilderingly fast pace paired with loosely explained plot elements muddle the story at times, but also contribute to the adventure’s engrossing atmosphere and humor." Kirkus Reviews summed up, "Dynamic, evocative color and movement easily carry this allegorical fantasy wherever the text is weak."

Mel the Chosen was published by Random House Graphic, and they offer more information about it here.