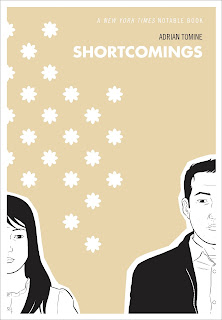 I am very late to the party in reading this book, and I am so glad that one of the students in my graphic novel course selected it to read with the class. Shortcomings is a modern class graphic novel, originally published as three issues in the late 1990s/early 2000s comics series Optic Nerve. It follows the trials and tribulations of a trio of Asian-American 30-something young adults as they navigate romance, friendships, and the demands of adult life to varying degrees of success. 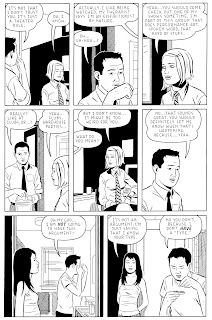 Ben Tanaka is the main protagonist, a Japanese-American movie theater manager who is acerbic, hyper-critical, and somewhat obsessed with white women. At the start of the book he is living with his girlfriend Miko Hayashi, who organized an Asian-American film festival, which Ben finds "shitty." Alice Kim is from Korea, and she and Ben went to college together, and they share a love for hating on things. She is also single and ready to mingle with a good number of people. When Miko decides to take a four-month-long internship in New York City, she and Ben go "on a break," which leads to a series of misadventures. Ever stirring the pot, Alice learns something about what Miko is up to in NYC and sends for Ben to come see.

All this roiling drama is a huge draw for this graphic novel, and it also features strong characterizations that make you feel repelled by and also empathetic towards the protagonists. It is an engrossing and vexing reading experience, a book that lingers long after it is read. The artwork is crisp, expressive, yet also very open to interpretation. I love how it is paced, with lots of personal interactions punctuated by memorable and provocative images. I loved this book, and I will seek out more from its author, whose works I have been remiss about picking up.

This book's creator Adrian Tomine, the 2021 Eisner Award winner for his memoir The Loneliness of the Long-Distance Cartoonist. He has been publishing comics for more than 20 years now, most notably his series Optic Nerve as well as the graphic novels Summer Blonde, Killing and Dying, and Scenes From an Impending Marriage. He speaks about his early career and work on Shortcomings in this interview from 2007.

This book is very well reviewed. In a starred review for Publishers Weekly Junot Díaz called it both a "lacerating falling-out-of-love story" and "an irresistible gem of a graphic novel." PopMatters wrote, "In place of a conclusive affirmation, Shortcomings weaves an intricate portrait of the various responses to age and identity that set in during the early years of post-twenties life." Jim Woldof called it "a meticulously observed comic-book novella."

Shortcomings was published by Drawn & Quarterly, and they offer an excerpt and more info here.

This book has been optioned to be adapted into a motion picture. I am very interested in seeing how it turns out.