Zeus: King of the Gods 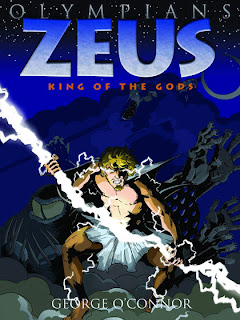 The gods, heroes, and monsters of mythology may have been the first superheroes, as some have written, and George O'Connor certainly casts them as such in Zeus. This book is one long narrative that tells the classical Greek version of creation. The world begins with Gaea, the proverbial Mother Earth who creates the Sky (Ouranos) in her loneliness and takes him as her mate. Gaea and Ouranos had many children, among them cyclops, giants, and the Titans. Kronos, the leader of the Titans, was unhappy with his tyrannical father and rose up and overthrew him. This cycle of violence would continue.

Kronos ruled the earth with his wife Rhea, but he feared his own children overthrowing him and so he ate them. Rhea was not thrilled with this situation but went along with her powerful husband five times. The sixth time, however, she could no longer go through with it, and she fed her apparently oblivious mate a rock made to look like a baby. The actual baby was hidden and grew to be Zeus, who would battle his father for control of the earth, learn to wield lightning bolts, and become the leader of his own pantheon of gods.

Reviewers have been very positive about this retelling of the classical myths. Michael May wrote that "the whole thing is a blast and a pleasure to read." John DeNardo opined that the book is informative and entertaining though light on characterization. J. Caleb Mozzocco called it "an all-ages book in the very best sense of the word" and said that "there are a great many pleasures to be had here."

George O'Connor has drawn multiple graphic novels, including Journey into Mohawk Country and Athena: Grey-Eyed Goddess, the first sequel to this book. He has a sketchbook blog where he shows and talks about his work. For more information about his series of Olympians graphic novels, check out this blog about them.

A great big thank you to Gina Gagliano for the review copy!
Posted by Stergios Botzakis at 1:11 PM