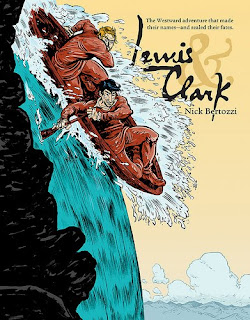 Meriwether Lewis and William Clark were two Virginians selected by President Thomas Jefferson to explore, study, and chart territory across the North American continent, including the newly acquired Louisiana Territory and the contested Oregon Country. Their exploits have long been considered classic tales of American heroism and exploration. This graphic novel puts a very human face on their journey, showing their interactions with local politicians, various Native American clans and tribes who have their own agendas, trappers, British, and Spaniards. The author shows them dealing with obstacles, difficult terrain, flatulence, in-fighting, and their necessarily Spartan regimen. These various events are told in episodic fashion, with dates and labels helping make sense of what happened when.

This beautifully rendered book is the work of Nick Bertozzi, a prolific comics creator who is best known for his graphic novel about the major players in the Modernist scene in Paris, The Salon, his art in the Houdini: The Handcuff King graphic novel, and his series Rubber Necker. That last work won 2003 Harvey and Ignatz Awards, and he was also awarded the Harvey for Best New Talent. Bertozzi also regularly contributes comics to the online Act-i-vate. He describes his artistic process in this entry from the Drawing Words and Writing Pictures blog.

Like much of Bertozzi's work, this graphic novel has been extremely well received. Beth Hewitt praises the book, citing Bertozzi's great craft in navigating the chronology of events and capturing the voices and personalities of historic figures. The Comics Journal's Rob Clough called the book "a clever, well-crafted and exciting mainstream story with a number of deeper flourishes" and also applauded Bertozzi's ability to make deceptively simple-looking work. The Graphic Novel Reporter wrote that it is "an intimate tale of a great American epic."

A big Thank You to Gina for the review copy!
Posted by Stergios Botzakis at 12:00 PM