Return of the Dapper Men 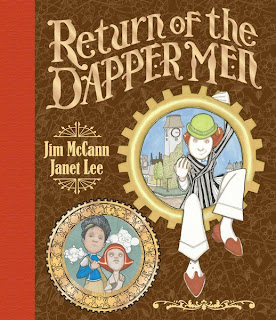 This gorgeously drawn graphic novel is part fairy tale, sci-fi story, mystery, and adventure yarn. And I warn you now, my description is not going to do it justice. The story takes place on the world of Anorev, where not many people live. Those who do live there are only children under age eleven. Clocks do not work; books are not read but used for stacking into rudimentary ladders. There are robots living underground, a giant angel statue looming over town, and a curious boy named Ayden, who is the only one who wonders why the world is the way it is. His curiosity leads him to question why time has stopped , and his actions bring about the arrival of 314 very dapper men who can fly and who have both mysterious motives and some answers.

Jim McCann and Janet Lee created this book. McCann, the author, began his career writing for music videos, television, and theater, and he also has written a series of comics about Hawkeye and Mockingbird for Marvel Comics. Lee is an artist who lives and works in Nashville; she has shown her artwork in galleries across the world. This interview with both creators casts light on how this collaboration came about.

Like fashion icon Tim Gunn, who wrote the introduction, most reviewers are impressed with this book. Comic Book Resources' Doug Zawisza celebrated it, writing that it reminds him "of everything comics can be." Reviewer Jonathan Pilley "can't recommend it enough, whether you're a young child with a robot friend or an adult who needs a reminder that even the innocence of childhood is fraught with grown-up decisions." Jill Pantozzi gushed about the book, calling it "a fairytale for a new generation."