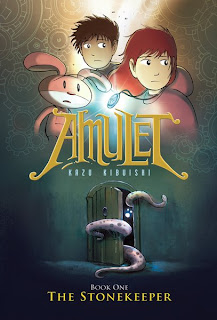 This gorgeous graphic novel follows the exploits of Emily and her little brother Navin. Years after the terrible death of their father, their mom moves them all to the home of their assumed deceased great-grandfather. Alone in a huge house in the woods, they find some strange things, such as a huge book and an amulet. Also, there are mysterious apparitions and tentacled creatures lurking in dark places. When their mother is kidnapped by a monster, the children are forced to chase after her, ending up in a parallel world filled with mystery and adventure. Although the story may seem cliche, it is extremely well executed, and the plot is as compelling as the art is beautiful to behold.

Writer/artist Kazu Kibuishi is an accomplished web artist and editor, known for creating and editing the well regarded Flight Anthology. He is also known for his steampunk western graphic novel Daisy Kutter (selected by the American Librarian Association as one of the Best Books for Young Adults in 2006) and his webcomic Copper, which is available as a print collection. He shares information about his life and work on his official website.

The reviews I have found have been largely positive. Benjamin Royce Jaekle praised the work as "promising" and called it "a quick, easy, and amazing read." The Graphic Novel Reporter John Hogan wrote that it was an "engrossing saga" and was intrigued by Emily's internal struggles. The reviewer at Through the Looking Glass added that this book was "a fascinating story about magic, destiny, fabulous technologies, and alternate worlds." There is also an interesting appreciation of the series from NPR's Darin Strauss.

Amulet: The Stonekeeper is the first book in a series of five. The fourth will be published in the near future, and the series has been well received in general. The first two books have been optioned for a film starring Will Smith's children Willow and Jaden.

This book is published by Scholastic (check out the publisher's link - it is surprisingly interactive!). The book's prologue is available here. And a video trailer can be seen here.
Posted by Stergios Botzakis at 11:35 AM