Hera: The Goddess and Her Glory 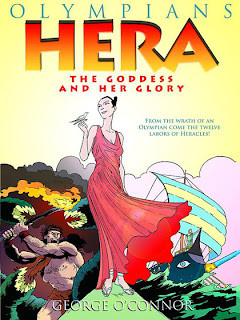 With this third volume in a series about the ancient Greek gods George O'Connor accomplishes two herculean tasks: 1) He portrays Hera not as a mere shrew but as a strong and intelligent woman, and 2) he puts a fresh spin on the oft-told labors of Heracles (aka Hercules to most). Here he tells the story of her birth and how she came to marry Zeus, the most powerful but also most unfaithful, king of the gods. He also tells how her name came to be associated with the Greek demigod, a product of her husband's infidelity. Ultimately, "Hera's Glory" is spread through Heracles's amazing accomplishments.

O'Connor is an accomplished writer and artist who has published numerous graphic novels, including Journey into Mohawk Country, Zeus, Athena, and Ball Peen Hammer. He also has created a number of picture books, including the New York Times best-selling Kapow! He talks more about his work on the Olympians book series in this interview. He speaks about this book in particular in this interview with Kirkus Reviews' Julie Danielson.

Reviews of the Hera have been very positive. April at CSI: Librarian called the book one of her favorites of 2011, drawing attention to the meticulous detail O'Connor puts into all aspects of the graphic novel. In this detailed review, Michael May wrote about he was also impressed by O'Connor's attention to craft, even though he does have a slanted view of Hera and chose to leave out some of the more negative tales involving her. The reviewer at Good Comics for Kids raved about the artwork and stated that this volume only adds to "a truly perfect series."

An excerpt, teaching guides, and other resources are available here from the book's publisher First Second.

A big thank you to Gina for the review copy!
Posted by Stergios Botzakis at 11:42 AM