The Lives of Sacco and Vanzetti 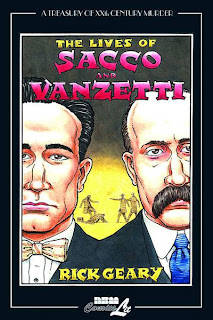 During the 20th century, there were numerous cases dubbed the "trial of the century" but one that had international repercussions was the one involving Nicolo Sacco and Bartolomeo Vanzetti. These Italian immigrants were accused of murdering two men in 1920 in South Braintree, Massachusetts. Because of a strong anti-immigrant sentiment at the time, the two anarchists were quickly tried and found guilty, despite potential judicial prejudice, witness tampering, and mishandling of evidence. The duo ran out of appeals and were executed by electric chair in 1927. This verdict and outcome was seen as a travesty by many and inspired protests, boycotts, and riots in the US and abroad.

Inkpot Award recipient Rick Geary does his typical ace job of packing the facts of the case into a compelling narrative. Notably, he also does a great job of capturing the voices of the two defendants and Judge Webster Thayer, who presided over the trial and its many appeals. His meticulous art injects a sense of drama and intrigue into the proceedings. More about his work on this book can be found in this CBR article and this interview on the NBM Blog.

The Lives of Sacco and Vanzetti was one of 2011's best reviewed graphic novels, appearing on numerous Best of lists. Bill Sherman wrote that Geary "does his usual superb job laying out both the facts of the case and the distinct world in which it all occurs" but remarked that he did not fully flesh out defense attorney Fred H. Moore. Jared Gardner was impressed by how Geary presented the story in a balanced manner "to remind us that while two innocent men may well have been executed that day in 1927, the case against them was not as thin as the history of the Left would have it." John Seven gushed that this book showed that "Geary is the foremost practitioner of graphic novel non-fiction" and remarked that the book created a lingering feeling that lasted long after the final page.

A preview is available from the book's publisher NBM.
Posted by Stergios Botzakis at 12:00 PM