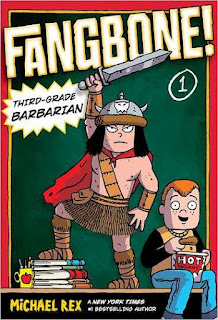 I was slightly surprised to find this book on the magazine shelf of a supermarket in New Windsor, New York, so I snapped it up to see what it was about. It turns out that this is the first book in a series - the second book is already out and a third is on the way. The premise here is that Skullbania, a land of barbarians, is under attack by the vile villain, Venomous Drool. In order to protect themselves from his armies of ghouls they have to send a volunteer away with the magical artifact Drool needs to rule the world. The young and brave Fangbone volunteers and is transported across dimensions to our world, where he must blend in as best he can. Of course, he ends up enrolled in an elementary school, and Homeroom 3G will never be the same again...

Michael Rex created, wrote and drew this graphic novel aimed at 2nd and 3rd graders. He is best known for his humorous children's books, including the parodies Goodnight Goon, Furious George Goes Bananas, and The Runaway Mummy. Rex elaborates more about his life and work in this interview.

Fangbone! does resemble other children books, notably the Captain Underpants series, with its sense of humor. So it is somewhat juvenile and gross. Tanya at books4yourkids.com had much praise for the book and its sequel in her spoiler-filled and enthusiastic review.  Elizabeth Bird praised the humor and references in the book, describing it as "a story where a stranger comes to town bearing a toe (not his own) and brings together a ragtag group of misfits. It’s like Shane meets The Bad News Bears with some hound-snakes and dirt devils thrown in for spice."  Kirkus Reviews had a different take on the book and harshly commented that "this series opener offers little novelty" but that it "may hold some appeal for young boys seeking hijinks over highbrow literature."

When I cracked this book, I did not expect to be as entertained as I was. The way that Fangbone and the students in 3G (the "special" class) get along is hilarious, realistic enough, and quite fun. The ways that they teach him about our world and he teaches them about being brave and sticking up for themselves are a little bit of a cliche, but I did not care so much because they were so well pitched. Regular readers and my friends can gauge just how juvenile I am, but I thought this book was enjoyable on many fronts.

Fangbone! Third-Grade Barbarian is published by Penguin Juvenile. The author provides a video preview of the book here on his blog.
Posted by Stergios Botzakis at 12:00 PM