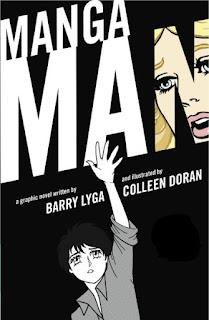 Ryoko Kiyama leads an ordinary life, as far as manga characters go. He has a girlfriend who has a magic mirror that allows her to change shape. He fights demons wearing a mecha suit. One day, a tear in reality sucks him into a strange new dimension. Ours. Life here is difficult. His manga proportions and appearance make people uneasy. He leaves speed lines in his wake for others to have to clean up. All his thoughts and emotions are clear to any passerby. As he tries his best to bide his time and fit in, he falls in love with Marissa Montaigne. When the two begin to spend time together her parents and jealous ex-boyfriend definitely do not approve.

This type of story has been around for a long time, embodied in works like Romeo and Juliet and Footloose, but this book's attention to the conventions of manga and American graphic novels makes it a unique take. The fact that beings from two different universes are drawn together and try to understand each other makes for a compelling and endearing story. Additionally, the use of manga features has the effect of a partial lampoon/partial homage that some fans will appreciate and enjoy. The mix of genre styles for the most part worked, resulting in moments of genuine joy, humor, suspense, and concern.

Mangaman is a collaboration between writer Barry Lyga and artist Colleen Doran. Lyga is a long time comics fan who is best known as a YA author. His well-received novels, including The Astonishing Adventures of Fanboy and Goth Girl, the CYBIL Award winning Boy Toy, and Hero Type, explore social and moral issues in high schools. The award winning Doran is best known for her long-running graphic novel series A Distant Soil, which she has been working on since the 1980s. She has also had major collaborations on characters such as Sandman and Wonder Woman. In recent years, she has taken to lecturing about manga, and she posts her artwork here.

Reviews of Mangaman have been very positive. At the Graphic Novel Reporter Collin David wrote, "Heavily experimental in both concept and execution, and very conscious of the differences between manga and American comics, it manages to embrace both audiences." Kirkus Reviews gave it one of their coveted starred reviews, summing the book up as "an inventive offering, sure to please fans of both American and Japanese comics." The Stumptown Trade Review praised the book as "fresh, different, and full of the kind of visuals that cannot be replicated in any other medium."

It should also be stated that this is a book aimed at teens, and it features issues that many teens deal with. There is a party with alcoholic beverages, though the consequences (e.g. vomiting) are also depicted. There is also one scene with heavy petting that results in some pixelated boy parts (a common manga convention).

Sample chapters, links, and more are available at the book's official page. Mangaman was published by Houghton Mifflin Harcourt.
Posted by Stergios Botzakis at 12:00 PM