The Glorkian Warrior Delivers a Pizza 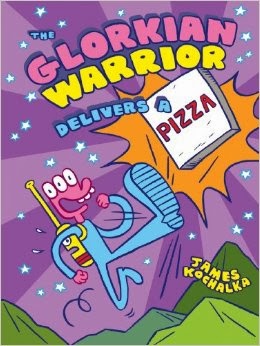 I have to admit I am of a few minds with James Kochalka. I find his artwork fun and appealing, and there are projects of his I truly love, such as the first two Johnny Boo books, Monkey Vs. Robot, and especially his Superf*ckers (NSFW) series. Others, like Pinky and Stinky, I am lukewarm about, and some, like the later Johnny Boo books, have really disappointed me because I find them pretty shallow, ridiculous, and even mean-spirited at times. Still, I know the guy is prolific and maybe I am being too touchy about what he thinks people want to read. He was the cartoonist laureate of Vermont, so what do I know? I just want to get all that out there before I tell you what I thought of this new volume of his work.

The Glorkian Warrior Delivers a Pizza is about a space superhero-type who receives a fateful phone call one day. 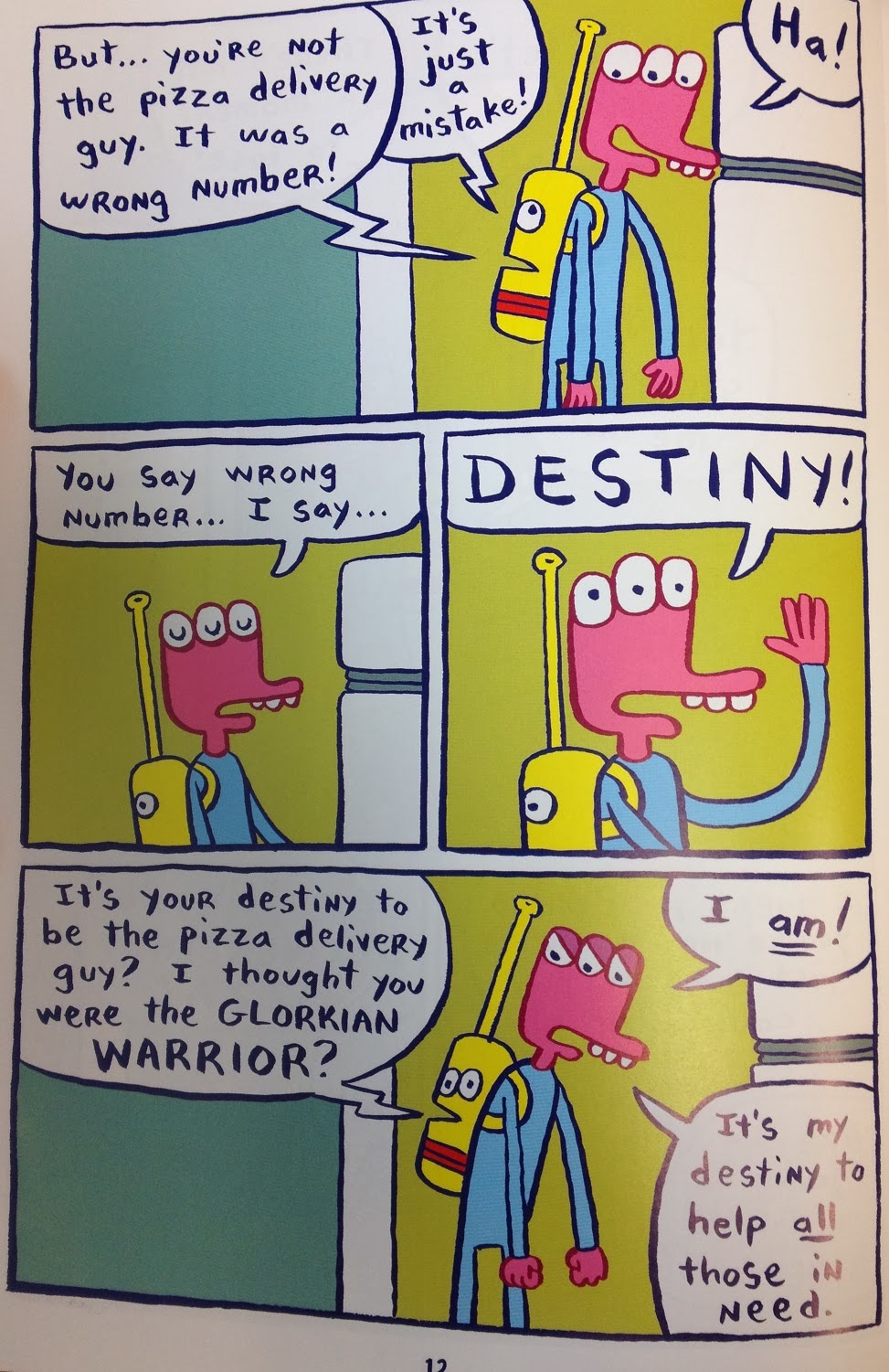 As you can see, he takes some things way too seriously, but at the same time this mission gets off to a shaky start when he decides to use his leftovers instead of a fresh pizza. 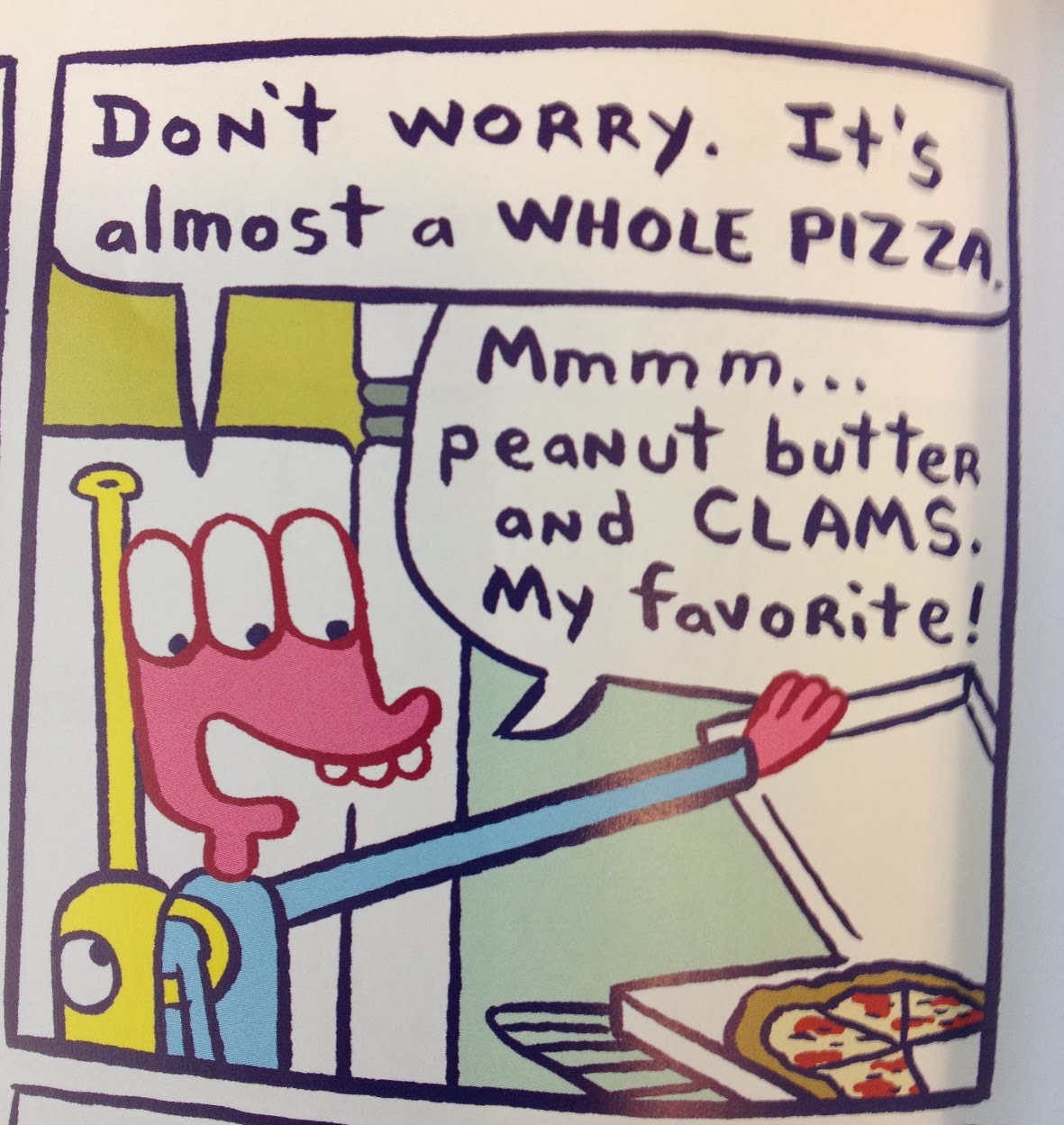 I am perhaps as ambivalent about this book as I am about Kochalka's work in general. There are some neat things here: a backpack that talks and shoots lasers, a kid in a giant power suit, and an adorable Space Invaders-type baby born from an egg. Regardless, even though I have been known to appreciate some mindless humor and cartoon violence this book mostly left me cold. I just cannot bring myself to root for the title character. He is incredibly stupid, frequently blows things up without any serious repercussions, and resorts to punching himself in the face repeatedly. There is nothing attractive about him, and perhaps I am not the target audience, but I find little redeeming quality in him and his oblivious and sometimes mean, dismissive ways. Maybe he's meant to be some sort of parody, but he just comes off like a dope and a bully. And in the end all his antics prove is that it is better to be lucky than capable.

This book's creator James Kochalka has won an Eisner Award, multiple Ignatz Awards, as well as a Harvey Award, and as I already noted he is the first person ever named Cartoonist Laureate for a US state (Vermont). He used to create a daily, online, diary comic American Elf and apparently still has updates there once in a while. He also has published a wide array of comics for all age groups, mostly through Top Shelf Productions. Kochalka speaks about his work on this book, its upcoming sequel, and his favorite kind of pizza in this interview.

Perhaps the best thing about this book is the color scheme. The artwork is simple and expressive, but I find the layouts and pacing a little too by-the-numbers. This is not Kochalka's strongest book, and although there are some silly bits that are entertaining, overall this book just is not my cup of tea.

Reviews I have read of this book range across the spectrum. Kirkus Reviews wrote glowingly, "Kochalka’s worlds are always winsome, strange and silly; this is certainly one of his stronger offerings." Publishers Weekly opined that the plot might be pointless "but fans of Kochalka’s brand of absurdity (or who want to watch the Glorkian Warrior punch himself in the face a lot) will still have reason to tune in." Sharon the Librarian offered her opinion that this book "is not my kind of humor," explaining that "the main character, the warrior, is the most unintelligent character that I have ever seen. Honestly, I know that it is part of the humor, and a relatively common tool, but this goes a bit to the extreme."

The Glorkian Warrior Delivers a Pizza was published by First Second. They provide a preview and much more here.

PS, Apparently there is a Glorkian Warrior video game in the works. Check it out if you are interested.