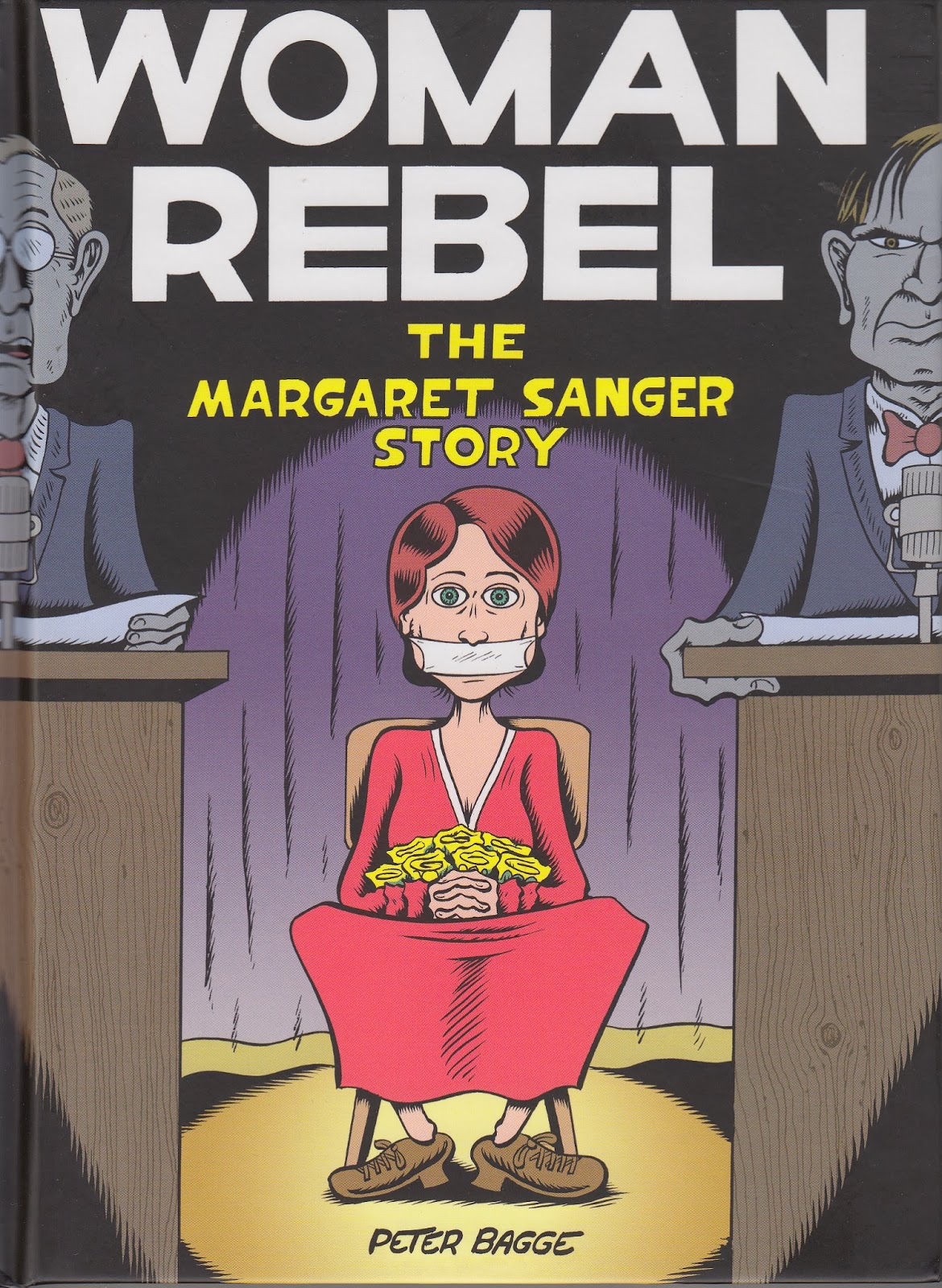 A profound biography full of profane moments, Woman Rebel is a dense, informative, dramatic, and entertaining biography of Margaret Sanger, a woman who had more than enough adventures to fill ten lifetimes. She trained in the field of medicine, married multiple times, traveled in social circles with figures like George Bernard Shaw, Mahatma Gandhi, John D. Rockefeller, and Emma Goldman, and was a free love advocate and lover of HG Wells, among others. She was a tireless advocate for women, immigrants, and those in a need; a tenacious fundraiser; an often persecuted defender of women's rights; a defendant in a number of landmark legal cases, and a popular and controversial public speaker. She was instrumental for raising awareness and funding for the creation of birth control methods as well as providing safe services in what came to be known as Planned Parenthood. And these accomplishments are just among her high points; I am leaving things out. 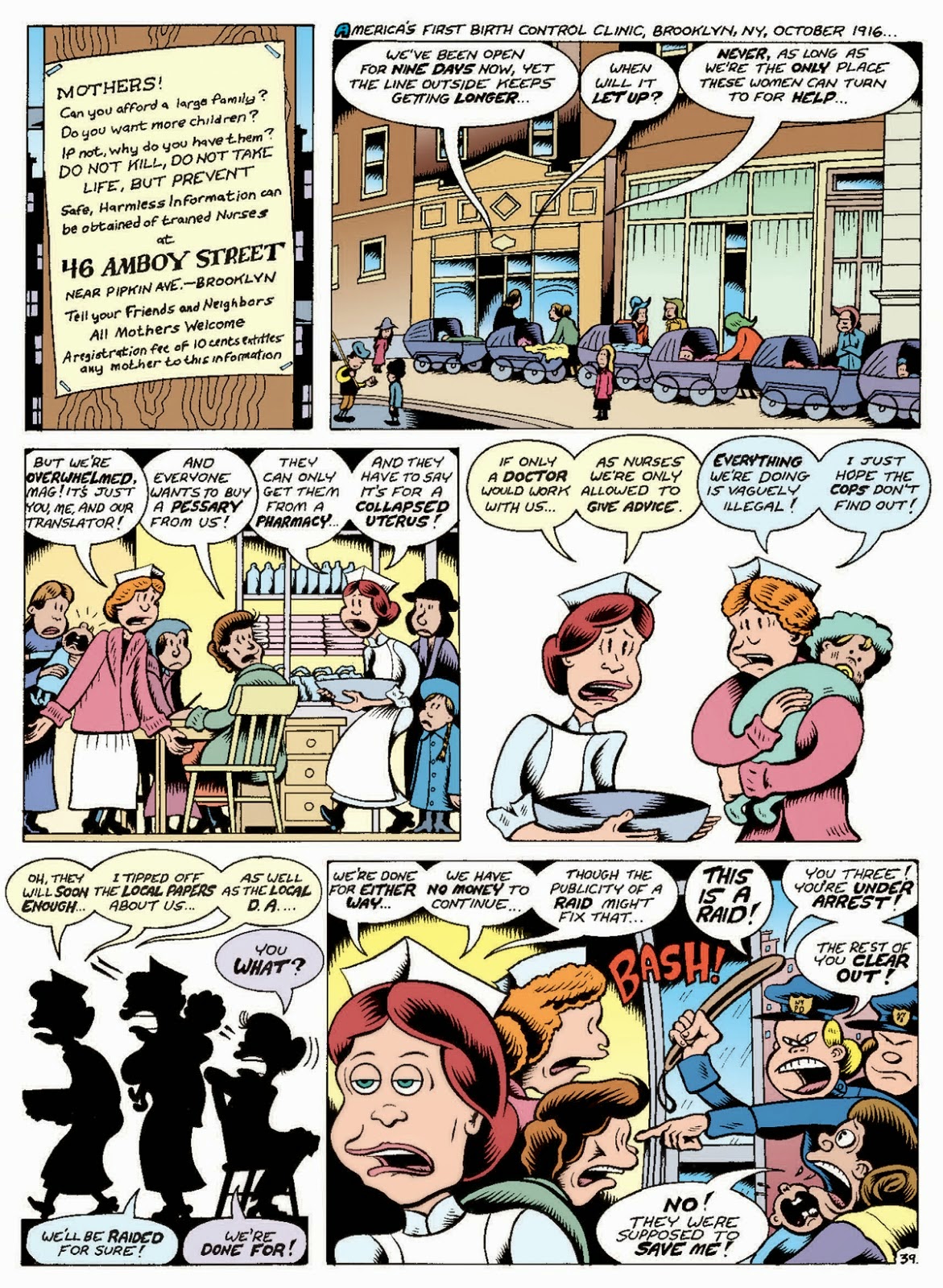 Sanger's methods and message were controversial in their day and are still controversial now, especially when interpreted in the light of statements about eugenics and her work with minority populations that has been (mis)construed as evidence she was trying to eradicate certain races. Author/illustrator Peter Bagge takes issue with these interpretations and here presents a well researched and documented (the back matter is dense and informative) take on her life. There are so many different episodes across multiple decades that this book is packed with interesting and evocative stories that made me laugh, cringe, or marvel at Sanger's accomplishments. And although it is not ostensibly realistic, I think that the cartoony and colorful art style only accentuates the energy and impact of this woman's life. What it lacks in naturalism it more than makes up for with its interpretive glory. 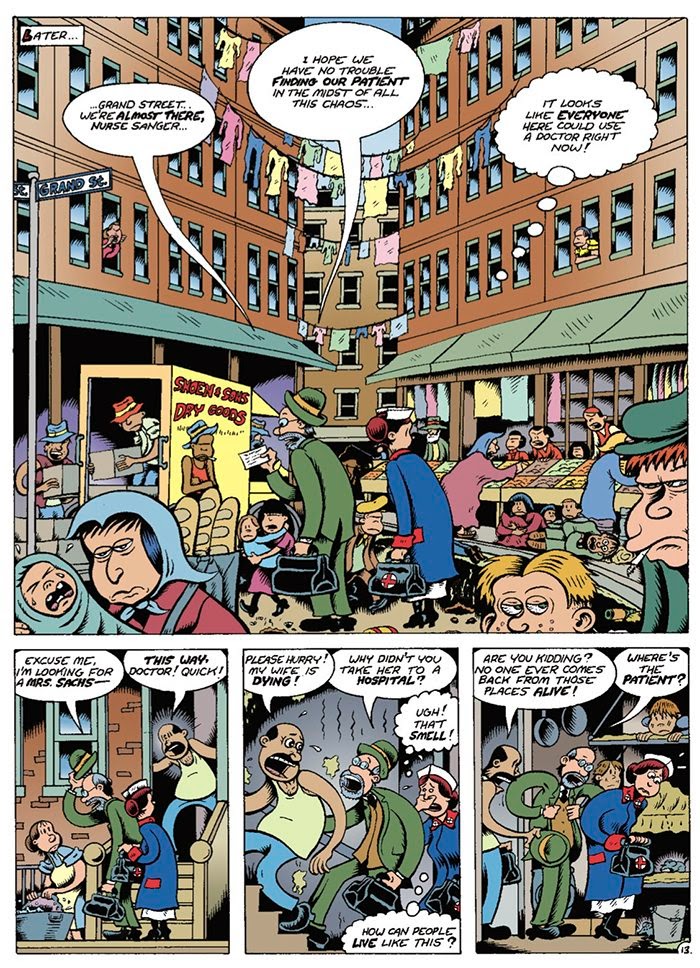 Admirably, Bagge does not shy away from depicting some of Sanger's less savory episodes and attributes and made great attempts to preserve as much of her original words in context as possible, even when he felt he did not agree with them. The result is an extremely well put together biography that provides much food for thought and many fascinating insights into a woman who profoundly affected world history.

That there is a great political bent to the proceedings should be of little surprise coming from Bagge's works. He is a frequent contributor to Reason magazine and his collection Everybody is Stupid Except for Me collects many of those strips. He is an award winning artist with decades of comics to his credit, including the seminal alternative comics series Neat Stuff and Hate and his editorship of the underground comics holdover anthology Weirdo. He has also created a number of graphic novels, including Apocalypse Nerd,  Other Lives, and Reset. He speaks more about his work on Woman Rebel in this interview.

All the reviews I have read of this book have been very positive. The Comics Journal's Chris Mautner opined that "it might seem extremely odd that someone like Bagge, whose work has so frequently relied upon on caricature, outlandish humor and slapstick would even attempt a work of this nature, much less succeed," but this book turned out "not just enjoyable and inspiring but a heckuva lot of fun." Rachel Cooke wrote that "Bagge is brilliantly economical" for managing to fit all the events and information into 80 pages of narrative. Dan Kois called the book "a fascinating testament to the ability of one person to make a difference in this world, as long as she’s a huge pain in everyone’s ass."

Woman Rebel was published by Drawn & Quarterly, and they provide a preview and more information here.