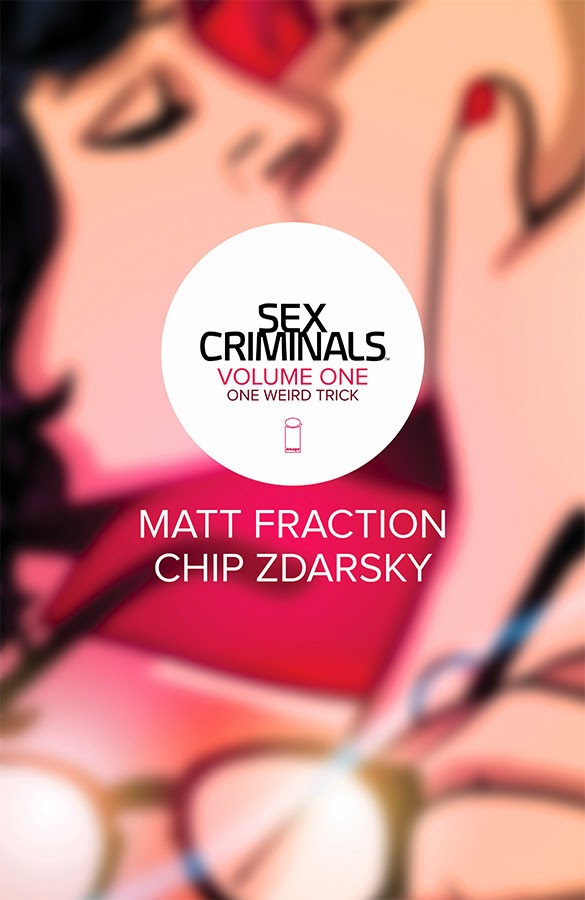 Sex Criminals is an ongoing series, and this volume collects the first five installments. The main character Suzie learns that "one weird trick" pretty early on in this book, and it is a doozy. Whenever she has an orgasm, time stops. Literally. For everyone and everything but her. 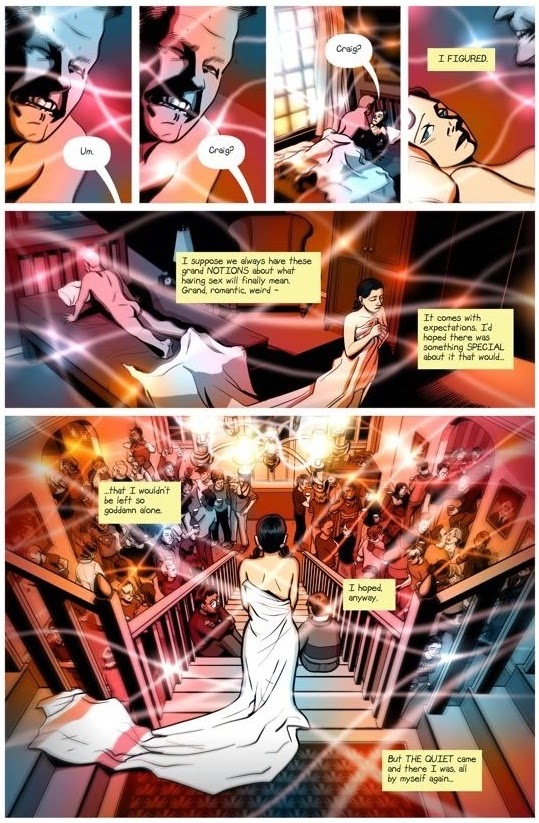 As one could imagine, this amazing discovery enchants then bewilders her, and she spends many years trying to find some answers about her condition. She is pretty much resigned that she will never know any more than she does when she meets a cute guy named Jon, sleeps with him, and then realizes that he is still very much conscious afterward. Having found kindred spirits, they shack up many more times and then hatch a plan to save the library where Suzie works by robbing banks during "Quiet" time. But what they don't know is that there are others like them who are onto their scheme, and those others don't want this couple of lovers possibly revealing their existence to the regular world.

Funnily enough, for a book based on a lascivious premise, there is not much in the way of nudity. The artwork is clean, colorful, and playful, but never gratuitous. Certainly, there is innuendo and a lot of frank talk about sex, but mostly there is playful banter and lots of ribald jokes. Although I can see lots of folks getting up in arms about the potential for excess with this series, what I have seen is more a humorous openness about sexuality and not anything pornographic. What is more, the characters are fleshed out and interesting. Suzie and Jon are smart, witty, and very into each other, and they have their moments of perspicuity when they question each others' motives and their relationship.

This verbal and visual romp was devised by writer Matt Fraction and artist Chip Zdarsky. Fraction is an Eisner Award winner famous for his creation Casanova as well as long runs on Marvel Comics such as Iron Man, The Immortal Iron Fist, and Hawkeye. Zdarsky is a comics artist and somewhat of a prankster, staging a fake campaign for mayor of Toronto and also messing with Applebee's restaurants via social media. Both creators speak about their work on this series in this interview at The Nerdist and also in this one with Comics Alliance.

Sex Criminals has been very well received. It has been a New York Times best seller, praised by Rolling Stone and Time magazines, and it was nominated for three Eisner Awards, including Best New Series, Best Continuing Series, and Best Writer. The first issue was so in demand it went into a sixth printing. Reviews I have read tend to be very positive about this compilation. The Comics Journal's Greg Hunter wrote, "When Sex Criminals is at its best, the comic examines sex from a position and in a manner that no other contemporary genre comic can claim." Ryan E.C. Hamm stated that "your enjoyment of Sex Criminals will completely depend on your ability to tolerate humor that relishes its juvenile bawdiness," but added that there are also "moments of surprising tenderness that cut through the raunch."

A preview and more information is available here from Image Comics.