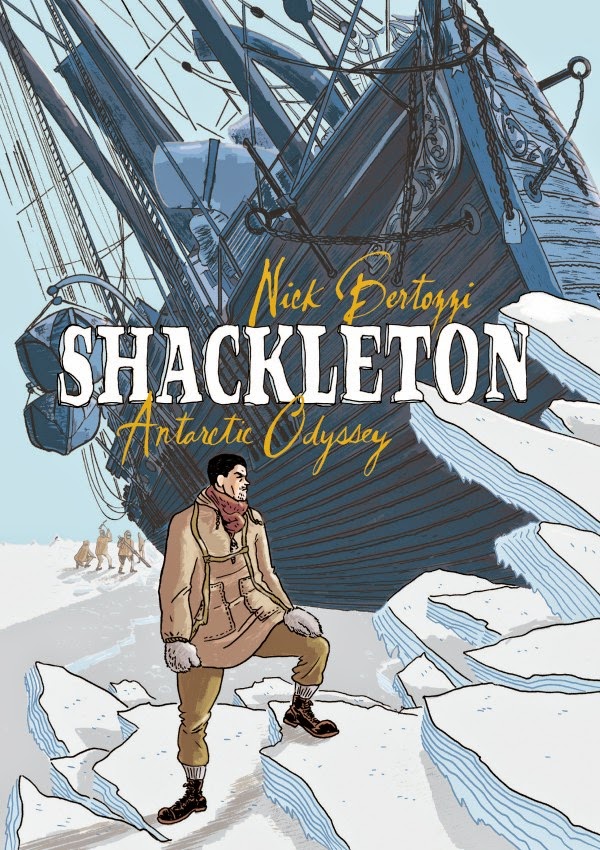 Ernest Shackleton was a British explorer who made multiple forays to Antarctica during what was called The Heroic Age of Antarctic Exploration. Many of the journeys he was a part of were historically significant, and the one chronicled in this book, the Imperial Trans-Antarctica Expedition, is considered the final journey in that Heroic Age. It is a harrowing tale of survival, with men facing adversity and life-threatening conditions in the pursuit of traversing the southern continent. This book presents various episodes in the trek, some technical and others very personal. It is an excellent balance of human drama and historical documentary.
The artwork is expressive, informative, and extremely expert in terms of its storytelling. Sometimes the characters blend together, but just marvel at how much gets packed into this two-page spread that opens the book, summing up what has transpired before these events:

The full array of tools available to sequential artists and graphic novel readers are on display here.

Author/artist Nick Bertozzi is an accomplished graphic novelist who has created a number of excellent nonfiction works, including Houdini: The Handcuff King, Jerusalem, and Lewis & Clark. He also created the historical fantasy romp, The Salon, and recently published a collection of his webcomic, Persimmon Cup. He speaks more about his many works in this interview.


Reviews I have read have been very positive. Publishers Weekly summed up a starred review, "A must-read for history buffs and fans of cinema-quality visual storytelling alike." In another starred review, Kirkus Reviews called it "A top-shelf rendition of one of the greatest survival stories to come out of the Age of Exploration." Kendal Stegmann wrote, "Even though the illustrations are fairly simple and in black and white, they are able to tell a very interesting and intense story." Barbara Basbanes Richter added, "Bertozzi’s black and white illustrations overflow with visual detail while creating a solid and engaging story."

A preview and much more are available here from the publisher First Second.