My Favorite Graphic Novels of the Year

Well, it's that time of year again. 2015 was an eventful year for me personally. I became a dad; I got married; I got a book contract, and I read a lot of books. Looking back, I noticed that I liked a lot more escapist stuff than usual this year, which maybe I should have expected.

Still, I think there were a good many quality books this year, and a bunch more that might be just as good if not better, only I did not get around to reading them yet. In any case, if you click on the hot-linked title for each book below, you will go to my original, lengthier review. So without further ado, here is my list of best books according to categories I just made up on the spot:

I thought this book was exceedingly clever, funny, and nuanced in surprising ways. Plus, it stars a not-so-villainous villain named Lord Ballister Blackheart and a not-so-heroic hero named Sir Ambrosius Goldenloin. I would recommend this book to pretty much anyone interested in reading or graphic novels. Or those interested in reading graphic novels.

This book made me laugh out loud frequently. This tale of a couple of magical tomb raiders who have to play an epic game of basketball against a surprisingly skillful mummy was full of heart, humor, and beautiful artwork displayed in a tabloid-sized format. I am so glad there is at least one sequel on the way.

If you have read my blog with any regularity you will know I love the work of Kyle Starks. I literally will buy anything he produces sight-unseen. This parody/homage to 1980s action films was not only right up my alley, it also showed just how great the man is at telling a story and also cracking lots of hilarious jokes.

Full of lush greens and beautiful linework, The Divine tells a story that weaves together the horrors of war, questions about youth and innocence, issues of colonialism, and the powers of myth in one gorgeous, thought-provoking package.

Best Superhero Book
Fall of the House of West

This third book in the Battling Boy series fills us in on the tragic backstory of Aurora West, a heroine who worked with her father to battle the monsters who steal children. Simultaneously thrilling, sad, emotional, and scary, this book contains some grade A world-building.

Best Use of Comics as Nonfiction
Unflattening

A dissertation in comic book form, Unflattening is a sequential art exploration of philosophy, education, and communication. This contemplative works employs a true combination of word and image, not just the typical "talking head" kind of academic comics that abound. It is a great book to read, re-read, and contend with.

This series is manga done Euro-style, starring a young boy, his mother, and a down-on-his-luck pugilist who allies himself with them out of convenience. It features a fighting tournament, surprising twists, a courtroom run like a professional wrestling match, and interesting characters who live in a not-quite-medieval world where they have more than modern technology.

A harrowing (for all parties involved) tale about a high school student bullied by a sadistic classmate, and what happens when an opportunity to turn the tables presents itself. It's very visceral and emotionally direct in terms of the story and the illustrations.

Originally published in France, this gorgeously rendered book is about a young woman who happens to strike up a relationship with a renowned, reclusive author. It features some good plot twists and a satisfying story, but the artwork is truly exceptional.

Best Use of Comics as Fiction
Russian Olive to Red King

A genre-defying book, or as one of the creators put it, "It's a ghost story, but it's not frightening. It's a romance, but it's not passionate." It's the story of a couple where one of them gets lost in an accident and the other tries to carry on living while also keeping some semblance of hope alive. This might sound cliched, but I found it an excellent tale of love, loss, and the redemptive powers of art.


Best Use of Comics as Fiction II
Tim Ginger 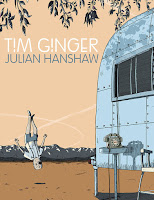 Another genre-defying book, this one about an ex-test pilot on a book tour who runs into an old flame. A beautiful book about growing old, finding one's way in the world, and dealing with conspiracy theorists. Also, it features a few meta-narrative touches that make reading this book a unique experience.

I might as well just call this the "Nathan Hale Award," but it is pretty insane how consistently excellent each entry in his Hazardous Tales series is in terms of style and substance. This one about Harriet Tubman taught me a lot about her history and my own ignorance.

It may not be fair for me to even name this book here, because it is so unlike anything else I have read. A three-part exploration of the life and work of war-time photographer Robert Capa via comics, his photographs, and a few essays. A thorough and apt tribute to an artist I was unfamiliar with.

This award might seem like a misnomer, because Bill Griffith has been drawing comics since 1969, but this is is first graphic novel. His account of his searching for clues about his parents' relationships and pasts shows a master artist in charge of his craft in terms of delineating personal moments and overall storytelling. Its insights into families, love, and life are lasting and provocative. 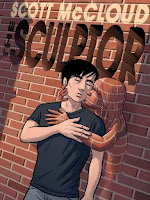 I have to admit I am not enthralled with the totality of this book, because it is sort of a cliched tale about a tortured artist finding troubled love and inspiration from a manic pixie dream girl. However, the first actual graphic novel from comics theorist and academic Scott McCloud, about a Faustian deal, features one of the best closing sequences I have ever read. I found it breathtaking, and it stuck with me for a while.
Posted by Stergios Botzakis at 12:00 PM