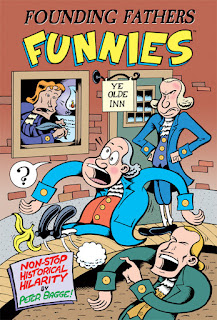 Peter Bagge is one of my all time favorite comics artists. He is an award winning artist with decades of comics to his credit, including the seminal alternative comics series Neat Stuff and Hate and his editorship of the underground comics holdover anthology Weirdo. He has also created a number of graphic novels, including Woman Rebel, Apocalypse Nerd,  Other Lives, and Reset. More recently, he has been a frequent contributor to publications like Reason magazine (see his collection Everybody is Stupid Except for Me) and Vice Magazine (the Musical Urban Legends column).

Founding Fathers Funnies is a collection of previously published shorter pieces that together weave a rich and profane tapestry about the lives of famous colonial Americans. What I like best about these episodes, aside from the fact that they are hilarious, is that they are both factual and full of personality. Too often we get homogenized or puffed-up portraits of these figures, but Bagge takes all the air out of their sails while adding his voice to historical events and participants' mannerisms. 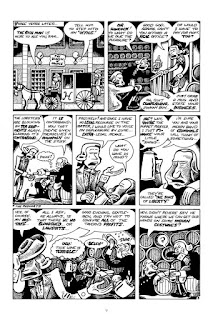 The result is a bunch of memorable and thoughtful pieces that made me ponder the circumstances of the American Revolutionary War. Certainly, these folks all had their various accomplishments, but I found it refreshing to read about an insular, contemptuous "Virginia mafia" (Jefferson, Madison, and Monroe), a caustic and carousing Ben Franklin, and an economical, pragmatic Paul Revere. Consequently, many of these guys (John Adams, Alexander Hamilton, and Thomas Paine) come off as really smart but also just plain unlikable. The lack of reverence really allows the reader to think about the actual people and events that took place, and I thought it cast a new light on some  well-tread material. 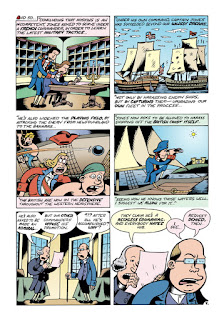 Finding reviews for this book proved to be quite a task, but the ones I did find were positive. Pat at Project-Nerd wrote, "The book’s cartooning and storytelling is excellent, but what I love most is that Bagge also writes an afterword featuring all of his footnotes throughout the collection." Chad called it "a brisk" and "rib tickling" collection.


Founding Fathers Funnies was published by Dark Horse, and they have a preview and much more available here. This book features profanity and some sexual situations, so it is suggested for readers mature enough to handle both.
Posted by Stergios Botzakis at 12:00 PM