Honestly, I have checked in here and there with DC Comics over the past five years. There has not been much attractive about their books since they rebooted into the new 52, and I find most of their books too dreary and depressing to take much stock in, because they seem to have equated gratuitous violence with maturity. But I have heard a lot of good things about this Batgirl book, so I decided to give it a try.

Now, I know Batgirl has a long and convoluted history. This version of the character was created in conjunction with the 1960s Batman TV show, and Barbara Gordon has been a librarian, a congresswoman, and eventually a paraplegic computer genius over the decades. Here, she is re-imagined as a hip 20-something living in the trendy Burnside area of Gotham City. She is still a vigilante, but one who spends her days studying computer science as a university student. So, this book looks at Batgirl as much as a person with a bunch of new relationships and tech-savviness as it does as her playing the superheroine role. Just look at this sequence: 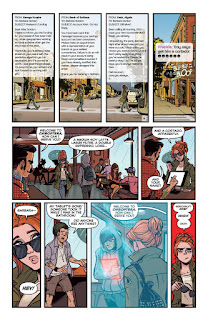 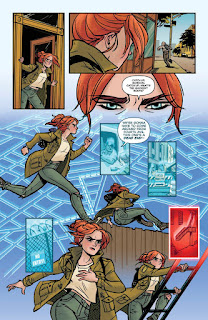 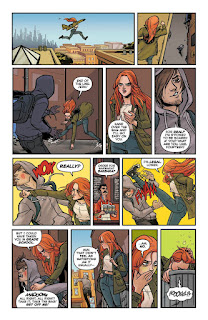 Overall, I found a lot to like about this book. It was fun, colorful, and it features some good character work as well suspenseful plots. I would not say it's the best superhero comics I have ever read, but it is certainly well crafted and enjoyable. And I did like that it was a very contemporary book. I do not know if it will age well, but in this moment this book is one of DC's top 3 publications (which is faint praise, at least coming from me, sorry). I would recommend it without hesitation to anyone who wants to read accomplished and entertaining superhero comics.

The creators behind this book are Cameron Stewart (plot and breakdowns), Brenden Fletcher (plot), Babs Tarr (finished art), and Maris Wicks (colors). Stewart is an Eisner and Shuster Award winning artist/writer who has worked on a number of different comic book series as well as his webcomic Sin Titulo. Fletcher is a veteran comic book writer, and Tarr is an illustrator who is relatively new to comics. Wicks has written and drawn a number of science themed graphic novels. These collaborators speak about their work on this series in this interview.

The reviews I have read about this book cover the full spectrum from praise to dislike. Matt Santori-Griffith wrote that this book "takes the mythos of Barbara Gordon and expands it even further, giving rise to a new chapter in her history," showing that that Batgirl stands alongside Superman, Batman, and Wonder Woman as one of DC’s premier heroes." Etelka Lehoczky called it "pretty good"  on the whole, especially the artwork and the story's take on digital identities. Dustin Cabeal wrote that he found this book too trendy and wrote, "This Batgirl is written and created based on public opinion and that’s terrible because public opinion shifts all the time"

Batgirl of Burnside was published by DC Comics and they have more info about the series here.
Posted by Stergios Botzakis at 12:00 PM