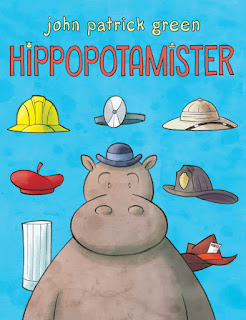 Hippopotamister straddles the line between being a picture book and a graphic novel, and it contains a wonderfully drawn, funny tale with a positive and meaningful message. If you or a young reader you know is looking for a book starring adorable animals who frequently find themselves in silly circumstances, this is it. I found the artwork to be absolutely charming and some scenes really made me chuckle.

The story revolves around a hippo living in a run-down zoo. His friend and neighbor red panda decides to go and live among the humans and returns with tales of great success. So, the hippo decides to join him out there. However, hippo quickly learns that red panda's tales of success are clearly exaggerated. 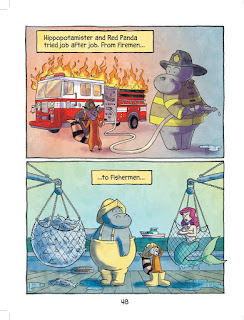 Hippo, though, turns out to be pretty versatile and skilled. Still, the duo bounces from job to job, with humorous and disastrous results, and over time they learn both what they are good at and what they struggle with. I don't want to spoil the ending, but I will say that finally both find a situation that plays to both of their strengths and they find themselves gainfully employed.

Hippopotamister is John Patrick Green's first graphic novel. He has drawn a number of other books for children as well as the mini-comic Teen Boat! written by Dave Roman (Astronaut Academy). He speaks at good length about his creative process on this book in this interview.

All of the reviews I have read about this book have been glowing. Publishers Weekly gave it a starred review and stated that "Green's characters burst with personality, his comedic sense shines, and his visual storytelling skills are solid." Johanna Draper Carlson elaborated, "although the story is aimed at younger readers, this is something I can certainly relate to, from needing to find a new occupation to a past-its-prime business making its “employees” unhappy to the way that Hippopotamister learns something valuable from everything he tries." Kirkus Reviews summed up by calling it "A charming book with a solid message about changing one’s life through hard work, imagination, and openness to new experiences."

Hippopotamister was published by First Second. They have a preview and much more available here.

Thanks, Gina, for the review copy!
Posted by Stergios Botzakis at 12:00 PM