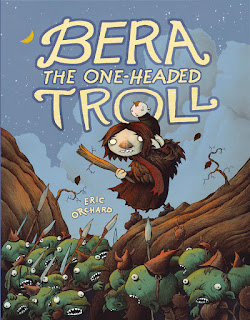 Trolls get a pretty bad rap in our world. On the internet, they are annoying, bait people into arguments, and are all-around jerks. Or in movies, they are monsters who attack people. But if all trolls were like the eponymous protagonist in this book, we would be singing an entirely different tune. Bera the One-Headed Troll features one of my favorite characters ever, and I have to say it is one of the most enjoyable graphic novels I have read in a while. Bera is the official pumpkin farmer for the Troll King, and she is excellent at her job. Because of her job she is pretty isolated, but over the course of this book we learn that she is also caring, resourceful, brave, and steadfast. And seriously, I am crushing on her pretty hard. 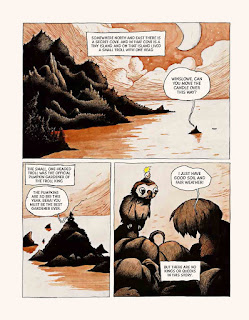 The set-up of the story is this: Bera finds a human baby on her island, and she wants to protect it from an evil witch and her nefarious plots. Not really knowing how to care for a human baby nor thinking herself a match for a witch, she seeks the help of legendary heroes and sets out on a quest with her owl friend as a guide. Along the way they encounter a host of baddies, vile mermaids, goons, and goblins. They also find a few unlikely allies in the form of hedgehogs and rats. Also, Bera learns that those who are venerated do not always end up being as heroic as advertised. 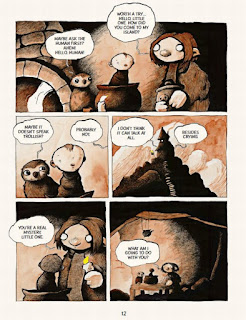 I was very much taken by this book. It is charming. Bera is a phenomenal character. And It struck just the right balance between classic (think Grimm Brothers) fairy tale/epic quest/heart-warmer. In short, I loved it, and I would recommend it to pretty much any reader, young or old.

This book's creator Eric Orchard has another graphic novel Maddy Kettle, under his belt. He has also illustrated a number of children's books. His artwork here is wonderfully muted and dingy, which suits the tone of the tale but is also surprisingly evocative. He speaks a bit more about his inspirations and work on this book in this article.

All of the reviews I have read about this book have been very positive. Kirkus Reviews summed it up as "An old-fashioned quest with a lovable protagonist." Rosemary Kiladitis wrote, "I love the storytelling, I enjoy Orchard’s art, and once again, great graphic storytelling brings an important message to readers in a powerful yet sweet fashion." Dustin Cabeal called it "memorable" as well as "touching, full of adventure, and just heartwarming."

Bera The One-Headed Troll was published by First Second, and they have a preview and much more available here.
Posted by Stergios Botzakis at 12:00 PM