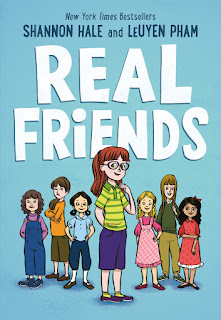 Real Friends is a memoir about the trials and tribulations of friendship in elementary school. The story here follows Shannon from her days in kindergarten to fifth grade. She has a tough time making friends at first but then meets Adrienne and something just clicks. They are inseparable for a while, but as they get older their relationship gets complicated by other friends, boys, and summer vacations. By the time second grade comes along, they start hanging around a girl named Jen. Jen is very popular and talented, and she ends up the leader of a collection of girls called The Group. 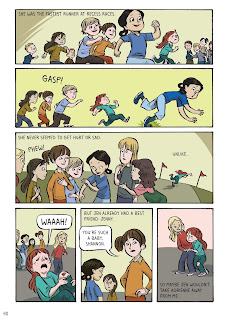 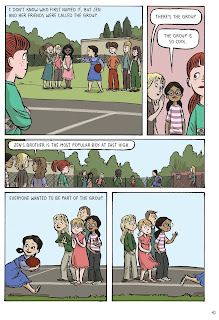 Much of this book involves Shannon's various adventures and misadventures with The Group. She strives to belong to it, but she also has to endure a lot of hardship and emotional pain from trying to fit in while being tormented by various Group members. On top of the friendship dynamics, we are also privy to Shannon's family life.  A middle child with four siblings, she often feels isolated and starved for attention. Adding to her load, her older sister Wendy has her own troubles and often unleashes her misery in Shannon's direction. In the end, I felt this book was a very relatable and accurate look at childhood friendships. The author also has a bunch of commentary before and after the story, and the whole enterprise resists easy answers and pigeonholing about people, which I found refreshing. Also, I very much enjoyed the emotion and various personalities conveyed through the art. This book is both vibrant and evocative.

This book is a collaboration between author Shannon Hale and artist LeUyen Pham. Hale is a prolific children's book and YA author, and she has a few graphic novels under her belt, too, including Rapunzel's Revenge and Calamity Jack. Pham has drawn a good number of children's books, including The Bear Who Wasn't There, and has worked with Hale before on a series of The Princess in Black books. Both creators speak about their work on this graphic novel in this interview.

All of the reviews I have read about this book have been glowing. In a starred review for the School Library Journal, Mahnaz Dar summed up, "This tender, perceptive graphic memoir is bound to resonate with most readers, especially fans of Raina Telgemeier and kids struggling with the often turbulent waters of friendships and cliques." Kirkus Reviews called it "A painful and painfully recognizable tale of one girl’s struggle to make and keep 'one good friend.'” In another starred review, Publishers Weekly called it "a wonderfully observed portrait of finding one’s place in your world."

Real Friends was published by First Second and they have a preview and much more about it available here.