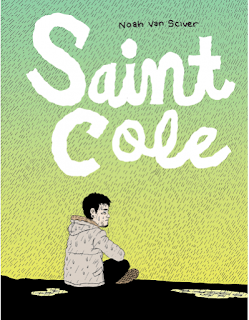 Saint Cole is an unsettling book, the story of Joe, a 28-year-old guy who lives with his girlfriend Nicole and their infant Oscar. He is getting by, working at a pizzeria, just paying their bills, but he's got problems. He feels the pressure of being the sole source of income, and he turns to alcohol to feel better. When Nicole's mother moves in with them, things get more complicated, setting off a chain of events that lead Joe down a dark, dark path. 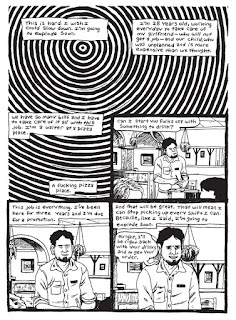 I am not going to say much more about the plot, because I do not want to ruin things. But the character work and pacing in this books are phenomenal. I could not wait to see what happened next, which was pretty exhilarating and horrible, like I was watching a slow motion train-wreck. And I must say, as dark and unrelenting as this book got, I appreciated the use of verbal humor and wordplay to sell a joke that gets set up at the opening of the book. Watching Joe figuratively and literally get punched in the face by life was a powerful story on its own, and it being punctuated with an unexpected punchline just highlighted how much craft and care went into executing this book. It also made me feel pretty disturbed and thoughtful about this book as a whole, which is the hallmark of a moving piece of art.

This book was created by Noah Van Sciver, author of the graphic novels The Hypo: The Melancholic Young Lincoln and Fante Bukowski. He is also known for his many mini-comics (some collected here) and the series Blammo. He has a Patreon page, where I am a sponsor for his work. He also has a Tumblr page where posts many of his works in progress. He speaks about his career and work on Saint Cole in this interview with the fine folks at the Comics Alternative.

All of the reviews I have read indicate that this book is a work to be reckoned with. Hillary Brown praised the artwork, stating, "There’s a smart mind at work here, drawing its visual references from a wide variety of sources." Paul Buhle called Van Sciver "a cartographer of his generation." Tom Murphy opined, "He captures perfectly the down-at-heel environment in which these less-than-aspirational characters play out their drama."

Saint Cole was published by Fantagraphics, and they have a preview and more info about it here. There are profanity, sexual situations, drinking, and some drug use throughout this book so it is suggested for readers mature enough to handle those topics.
Posted by Stergios Botzakis at 12:00 PM