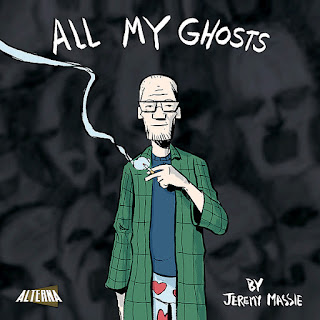 Last month I went to HeroesCon in Charlotte, NC and had a blast seeing my friends, some artists, getting some original art, going to panels, and buying some new books. I did not buy as many books as I have in the past, because I find I don't get to read as much as I'd like right now, but I did manage to pick up a few things I might not otherwise. One of these such purchases was this book, All My Ghosts, by Jeremy Massie (a very nice guy who I had a lot of fun talking to about his work). It is a "slice of life" story about a middle-aged man named Joe Hale who runs a local newspaper. The business has been in his family for generations but times are getting tough and it is increasingly difficult to keep it afloat. On top of this major problem, Joe also has a bad case of writer's block and is in a general funk. 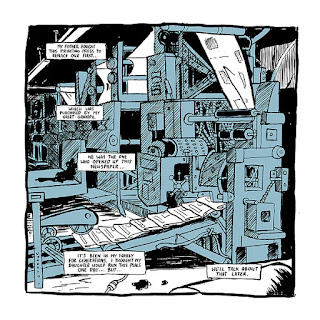 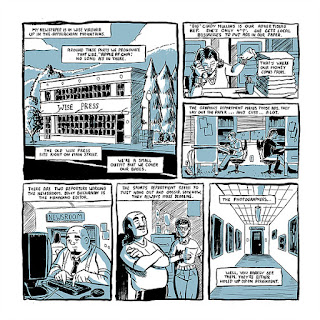 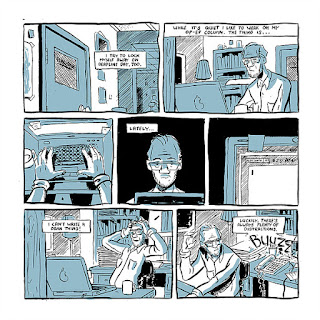 His life takes a major turn when an opportunistic company swoops in to buy his newspaper, and he goes through a series of changes, mostly for the better, although many of the people around him would probably say differently. In shaking off the ghosts of his past, he gets a bit selfish and the consequences of his actions have a large impact on his friends, employees, and various townspeople.

What I liked about this book were its spare yet powerful art style and that it told a realistic, personal story in a thoughtful and interesting way. Not much about this book turned out as I expected, and I liked how it resisted an overall "feel good" vibe. Perhaps not everything played out well or in a satisfying way, but this book has a lot of raw energy and artistry, and I enjoyed reading it. Not all of the characters were well defined, but the ones that were seemed very real and familiar. Heck, I'd read the continuing adventures of Joe Hale if there were more to come.

Like I wrote earlier, this book is the creation of Jeremy Massie, who has a number of other works under his belt, including the horror story Bee Sting, a quirky superhero tale called The Deadbeat, and the current ongoing, all-ages series Amazing Age. He speaks about his work on All My Ghosts and his other works in this interview.

Most of the reviews I have read about this book found it uneven, though they all praised the visual storytelling. Johanna Draper Carlson was a bit let down by the book overall but also stated that "the story is told strongly when it comes to the art, and I would check out Massie’s next project." Jason Wilkins wrote, "Massie’s cartoony style is expressive and accessible. All My Ghosts is so easy to read in large part because his art is so pleasing to the eye." Nick Ford found some good parts in the book but also commented, "The story’s not bad but it’s handling a timeless conflict that’s been done a million times before."

All My Ghosts was published by Alterna Comics, and they have a preview and more info here. It was originally released as a four-issue series, and the physical graphic novel was funded initially by way of Kickstarter.

This book features some adult situations and themes as well as occasional profanity, and I'd recommend it for more mature readers.
Posted by Stergios Botzakis at 12:00 PM