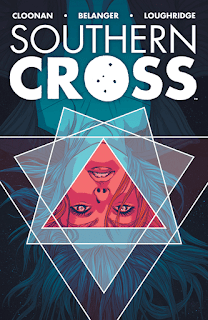 I have been wowed by images from this series across the social media platforms I frequent, so much so that I took a flyer on buying this volume on Comixology. I have had it on my device for a while but just got to it, and I have to say I am kicking myself for not reading it sooner. Southern Cross is some of the most compelling, suspenseful comics I have read in years. I would put it in a category with works like the original Alien movie or Alan Moore's early Saga of the Swamp Thing stories. It's that great.

The story follows Alex Braith, a troubled woman with a checkered past, as she rides the space freighter Southern Cross to Titan to retrieve the body of her estranged, now dead sister. 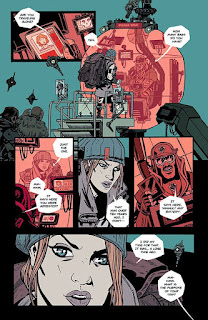 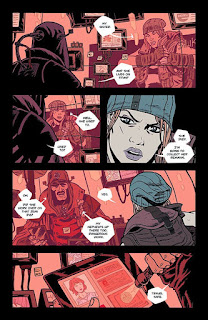 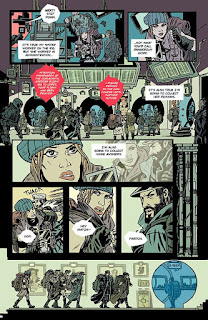 Along the way, she encounters many interesting, if upsetting, events and people. There's the creepy mercenary who keeps propositioning her, a doctor who keeps offering her illicit substances, and her surprise roommate who starts out just avoiding her before possibly disappearing. Also, the warp drive on the ship is malfunctioning, creating all sorts of strange, horrific visions that may be dreams, or something worse.

The more Alex stays aboard, the more she learns, not just about what happened to her sister but what illegal activities some of her shipmates are up to, not to mention a horrible evil presence that threatens not just the ship but also the universe. I struggle with calling the events of this volume a ghost, zombie, or Lovecraftian story, though it does share some elements of those things cast in a science fiction setting. I will say that it is a finely crafted mystery that is seriously spooky and horrifying. The cast of characters is wonderfully shady and suspicious, and the artwork appropriately paints a dingy, menacing atmosphere.

What is best, this book does not reveal all and it seems that much is yet to come. So, in the end I am sort of glad that I waited this long to read the series because the second volume is coming out in a few days. And I guarantee you I will be reading it much sooner than I did this one.

The main players in creating this book are writer Becky Cloonan and artists Andy Belanger and Lee Loughridge. Cloonan is a comics writer and artist who has been nominated for multiple Eisner Awards and is best known for creating Gotham Academy as well as for her work on the series Demo and By Chance or Providence. Belanger has drawn many comics and is known for his work on the series Kill Shakespeare. Loughridge is a colorist who has worked on many Batman titles as well as some indy works like Deadly Class. Cloonan and Belanger speak about their inspirations and work on this volume in this interview.

All of the reviews I have read about this book have been full of praise. Aubrey Douglas wrote, "The story is compelling, the characters are interesting, and the artwork is some of the best that I have ran into. If you haven’t read this book, you’re doing yourself a disservice." Eric Houstoun stated that "Becky Cloonan and Andy Belanger manage to create something very special in the first volume of their book and have created something distinctive and unique." Paul Aloisio called it "a celebration of the comic book format. It’s fun, yet scary. It’s spooky, but it never gets overbearing."

Southern Cross was published by Image Comics, and they have a preview of this book and more information about the series here. This book book collects the first six issues of the series and is intended for mature readers.
Posted by Stergios Botzakis at 12:00 PM