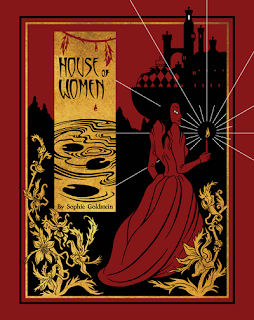 Originally published as a series of mini-comics, House of Women is a gorgeous and thought-provoking science fiction story that I found somewhat unsettling. I think that such discomfort is a perfect response to have to a book like this, as it tackles some pretty large issues while also spinning a suspenseful yarn about space exploration. The premise of this book is that a group of female missionaries have been assigned by the Empire to a backwater planet in order to educate and study the local inhabitants while also converting them to their belief and political systems. 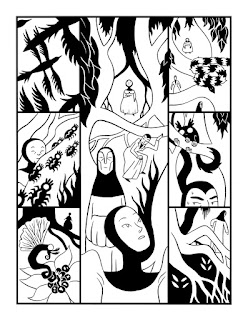 There are a few complications to their mission, of course. First, the last group of emissaries from the Empire mysteriously vanished, and they are searching for clues to what may have happened to them. Second, they can only work with the female creatures, as they are open to education, whereas the males are hostile and violent. Third, the planet appears to be an Edenic paradise in some ways, but there are also wild and savage features that offer some peril. Fourth, there is a mysterious male guide who offers them help from a distance, though he is from another planet and has his own (shady?) motivations for being there. Finally, the women are a varied bunch, and they all have their various reasons for their work. Some have more virtuous intentions than others, and some are more out for themselves than for supporting the group.

Overall, I have to say that this book is excellent. It is extraordinarily drawn, with beautiful black and white images that resemble woodcuts and feature clean, geometric images. The story and subplots are well-woven together, and I feel that the characters are strong and complex. And perhaps what makes this book work most is that it has a constant undercurrent of anxiety, fear, and violence just beneath the surface. This book is an exquisite work of scifi and horror that will make you jump while also making you think.

House of Women is another impressive graphic novel from the Ignatz Award winning Sophie Goldstein. She has published a couple of graphic novels prior, Darwin Carmichael is Going to Hell, a fun, myth-based webcomic collaboration with writer Jenn Jordan, and The Oven, which was also a provocative sci-fi tale. She speaks extensively about her work on HoW in this interview with the Comics Alternative.

All  of the reviews I have read heaped acclaim on this book. Publishers Weekly praised it in a starred review as "another remarkable graphic novel from a creator whose approach to SF consistently defies expectations." Laura McKinley wrote in a starred review for Library Journal that Goldstein "offers readers much to reflect on in this sexually visceral tour de force, filled with intense black-and-white imagery and exploring what it means to “civilize” people without first weighing the consequences." John Seven called it "extraordinary, smart, beautiful." Oliver Sava wrote, "It’s a gorgeous hardcover, and the elegance of its trade dress makes it stand out while informing the interior contents, which are similarly refined."

House of Women was published by Fantagraphics, and they offer a preview and more about it here. In addition to its serious, adult themes this book also features nudity, sex, and violence, so it is suggested for readers mature enough to handle such things. 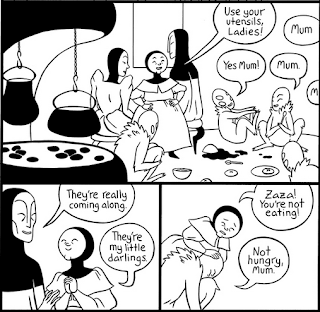