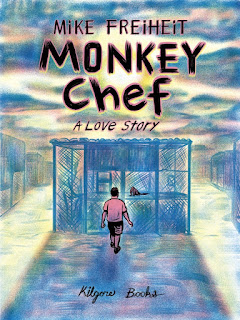 I first became aware of this book from a Kickstarter campaign for Kilgore Books and Comics, where I did pitch in to buy a bunch of issues of Noah Van Sciver's Blammo. The title and concept were intriguing, but I was short on funds for getting other books. I was happily surprised when I saw the book and author at HeroesCon this summer tabling right next to my pal Patrick Dean. I bought the book, read it that weekend, and told Mike Freiheit in really awkward ways that (spoiler) I enjoyed it.

Monkey Chef is an autobiographical tale about a man who is looking for ways to escape a dead-end job and also figure out life and love. When the book opens he is in a job he does not really care for, and he's also struggling to date women. Ironically, he meets a really wonderful woman right before he commits to go to South Africa for a year to work at a primate sanctuary. Still, he goes and during that year he learns a lot about himself.

His primary job at the sanctuary is to prepare food for the various monkeys as well as for his fellow co-workers. Over time he really gets to know the monkeys' behaviors and develops some favorites. He also makes lots of observations about how primate behavior relates to what humans do, too. All of these observations come into play when Mike struggles with maintaining a long-distance relationship, dealing with the various travelers who cycle in and out, and just figuring out what it means to be masculine in today's society. I very much appreciated his candor and introspection throughout this book. I also liked how he also inserted humor into all of his ruminations, like you can see in the excerpt below. 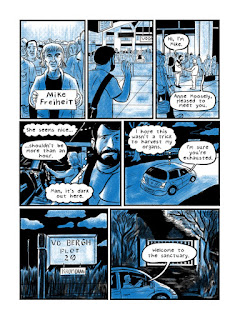 In the end, I felt that this was a compelling and thoughtful graphic novel, well rendered in terms of art and story. I loved the overall atmosphere of the narrative, which is conveyed with the muted, cool colors throughout. I also found much to relate to in terms of my own growing up and figuring out the various relationships in my life. I am sorry that I did not get this book sooner, but I am very glad that I got to get it directly from the author, who was also gracious enough to sign my copy.

Mike Freiheit originally published Monkey Chef as a series of mini-comics. In addition to making comics, he helps organize The Chicago Alternative Comics Expo (CAKE) and teaches at School of the Art Institute of Chicago. He speaks more about his work on Monkey Chef in this interview.

I was not able to find many reviews of this book online, but Rob Clough wrote about two of the original mini-comics for The Comics Journal. He wrote that he very much appreciated how the story was told, not so much in straight-forward, chronological fashion, but "Freiheit's approach is a more artful one, juxtaposing different events against each other in interesting ways."

Monkey Chef was published by Kilgore Books & Comics, and you can see more about it here. There is also a sizable excerpt of it available here from The Comics Journal.