A spotlight on Silver Sprocket

One of my favorite things about Derek was how much he loved to read all sorts of comics. That included works from lots of publishers, and I was struck by just how much he seemed to know about a wide array of creators and countries. The breadth of his fandom was impressively comprehensive.

We would toss around ideas about shows we wanted to do and books we wanted to read, and I know we were thinking about a spotlight on Silver Sprocket. It is a publisher, creative crew, and gallery based in San Francisco, and they have a definite punk rock ethos. I had read and enjoyed a book published by them a few years ago, Liz Prince's Be Your Own Backing Band, and they have an interesting bunch of creators associated with their press. So when I had some holiday money this past year I got a few of their books, and I will share them with you here: 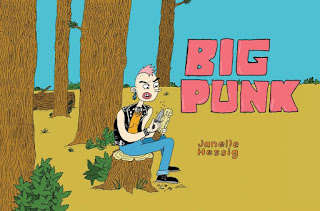 Big Punk is an 18-page story by Janelle Hessig where a lot happens. A punk woman who has been living in Fog City decides that the town is just to gentrified and hipster-ridden for her anymore, so she moves out to the country. 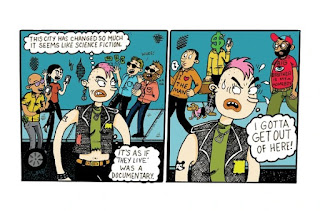 After a few weeks of peace and quiet, she grows bored and restless, and (without spoiling too much) she gets involved in a very unlikely relationship. With her life transformed, she settles in some, though still with a prickly relationship with the locals.

This book is funny and shocking, with some sexual humor as well as profanity, but it is also an interesting take on what happens to rebellious people as they grow older. Sure, they carry on the struggles in their own ways but their lives and popular culture transform as well. In a different way, it reminds me of the themes in Jaime Hernandez's Is This How You See Me? with its take on aging punk rockers. It is intriguing to see how defiant people eventually settle down, particularly when they do not necessarily mellow out.

I very much admired the artwork, too. It is very bold with clear storytelling, and best of all for me included lots of details, like the titles of books on the punk woman's book shelf, that really helped make this cartoony world feel real. It is a funny and provocative book, with a surprising amount of heart. 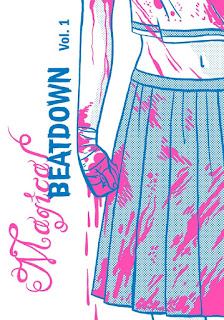 Striking a different note in its 32 pages, Magical Beatdown, Volume 1 by Jenn Woodall is a garish, revenge fantasy done as a mash-up of manga tropes. The protagonist is a mousy, goody-two-shoes who resembles Sailor Moon. She is playing arcade games when she gets accosted by some tough-looking juvenile delinquent types. The story then shifts from blue to hot pink (literally), and the main character transforms into a badass warrior who brutally murders everyone who crosses her. She also swears a lot. The story is satisfying in two ways: there is the joy in justice being served and the ultra-violence is done with verve and a sense of humor. 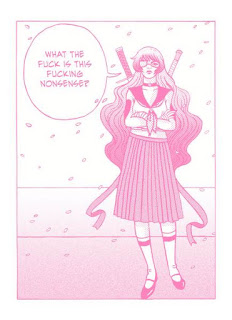 I won't say it is the deepest or most meaningful book I've ever read, but it's a delightfully gory confection. The artwork is very expressive and over-the-top, but at the same time quite gorgeous. There is a Volume 2, and it was a 2018 Doug Wright Spotlight Award Winner. I will definitely be checking it out soon. 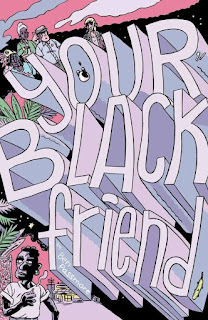 Inspired by the philosophical work of Frantz Fanon, Your Black Friend by Ben Passmore checks in at a seemingly slight 12 pages, but they are dense with ideas and feelings. It chronicles a short series of exchanges at a coffee shop, but within those moments all sorts of history and culture get unpacked. The "black friend" observes an oblivious older white woman having an exchange with the barista, and it sets off his train of thought. 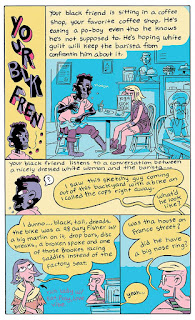 In a few short seconds, he ponders his past experiences with similar people, how black culture gets co-opted, how he feels he has to perform for both whites and blacks in ways that alienate him from both groups, and his own tenuous friendships. Towards the end of the story, he also has a brief revenge fantasy play through his head, but it is not nearly as explosive as that in Magical Beatdown, and it only highlights the futility and frustration he feels.

Your Black Friend is pretty text-heavy, but it is also propelled by an iconographic art style that features bold, primary colors for places and backgrounds but is aptly static when applied to the protagonist. It seems like there is great potential for explosive reactions, but he is constrained by culture and potential racist backlash and maintains a flat, seemingly nonplussed affect. He maintains his face like a mask, not betraying his thoughts about his plight.

This book is thought-provoking and powerful, and it won the 2017 Ignatz Award for "Outstanding Comic." You can read it all for free right here, but I think it is also well worth buying, perhaps in this collection.

After reading these comics from Silver Sprocket, I was very impressed with their offerings. I marveled at how subversively socially conscious they are, and I admire the contemporary punk ethos they communicate. At the same time, I did not really feel they were preachy, as they were very enjoyable reads as well.  These comics are the best sort, ones that are deep and entertaining at the same time.

All of these books are available here from Silver Sprocket, which also offers a good variety of other titles. Go check them out!
Posted by Stergios Botzakis at 12:00 PM