Nico Bravo and the Hound of Hades 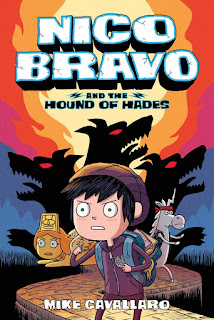 There are about a million books based on concepts from mythology, and I think that 99% are not as enjoyable as this one. Nico Bravo and the Hound of Hades mashes together a good many concepts and universes in a story that is inventive and funny with just the right touch of mystery and suspense. Nico is a young orphan who works at Vulcan's Celestial Supply Shop. Vulcan makes all sorts of items that appeal to the mythological crowd, and he caters to pretty much every monster, god, demigod, and adventurer from all pantheons and folklore. 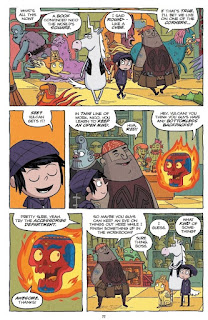 Joining Nico in stocking shelves, counting inventory, and running the cash register are Lula, a sphinx, and Buck, a unicorn. The first few pages of this book give us insight into the workings of this establishment, but after Vulcan whips up a new batch of items, including one giant magical sword, things take a turn toward adventure. Eowulf, a young descendant of Beowulf, buys the sword and sets out in the world to make her name. Her first task is do vanquish a mythical beast and she sets her sights on Cerberus. Nico 1.) does not think she's worthy of the weapon and 2.) wants to defend the three-headed dog as it is not so vicious and also maintains a vital role in keeping the dead in the underworld. He leaves the store to stop her and ends up on his own epic adventure. Along the way he learns some curious things about his past, meets one of his heroes, and runs afoul of some real monsters.

This book is chock full of cool variations on mythological themes. There are funny scenes in the shop, such as when potential customers Thor, Zeus, and Iskur squabble over the last jar of lightning. There are inventive artifacts like a bottomless backpack (that comes complete with wings that help its wearer travel). It also plays with the tropes of the hero's journey, and features lots of cameos from notable figures. It is a real smorgasbord for any fan of myths and legends. 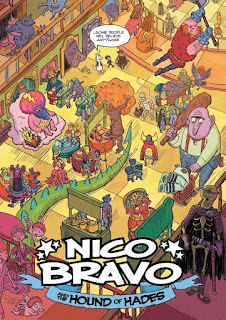 This book is also a feast for the eyes, with the artwork being a huge reason why everything works so well. Many panels are crammed full of interesting and arresting details, in the vein of classic Mad Magazines, so there are multiple gags, references, or other cool things to observe. The characters are very expressive and colorful, and the storytelling is bold and extremely easy to follow. I also love how this book handles so much exposition in an economical way through of clever devices like trading cards.
I was very impressed with this book as it features great characters, a plot full of twists and turns, and lots of mythological hi-jinx. It juggles all sorts of stories and players (I did not even mention the plot to avoid a dystopian future following the Unicorn Wars), and it does so with panache. I loved reading this book, and I am psyched that there will be two sequels, making up a trilogy.

Mike Cavallaro created this book, and he is no stranger to drawing graphic novels. He illustrated the YA sci-fi book Decelerate Blue written by Adam Rapp as well as the Foiled series written by Jane Yolen. He also drew the comic book series Impossible Incorporated written by J.M. DeMatteis. He spoke about his work on the Nico Bravo books in this interview.

All of the reviews I have read of this book have been positive. Lori Henderson wrote, "Middle grade readers will love the adventure and humor this graphic novel offers." Publishers Weekly praised the "bright, psychedelic illustrations." Megan Rupe called it "a delightful fantasy comic...[that] has a lot going for it."

Nico Bravo and the Hound of Hades was published by First Second and they offer a preview and more information here.
Posted by Stergios Botzakis at 12:00 PM