Fights: One Boy's Triumph Over Violence 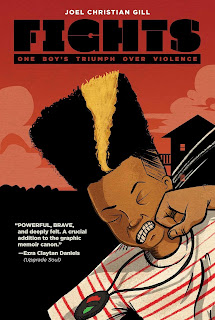 I have read most of the books published by Joel Christian Gill, such as his Strange Fruit anthologies and Tales of the Talented Tenth series. Those have been nonfiction histories, but in Fights he turns to a more personal topic, a memoir about his own childhood. With his mother being incarcerated when he was very young and her not always being able to provide a stable environment for him after the death of his father, Gill got bounced around to live with various family friends and relatives, with varying amounts of supervision and support.

Also, sometimes those places brought other sorts of violence or abuse that he had to contend with. As a consequence he learned early on that he had to rely on himself for many things and also that meant he had to learn to fight. There are many commonplace adversaries along the way: bullies on the school bus, racist jerks who try to shake him down for money, and rivals who want to maintain their reputations and protect their turf. Gill has to deal with a lot of adversity to try to fit in and also carve some space for himself. It seems that he always has to be on the offensive and can never really relax his guard. 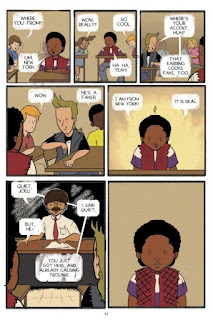 It is easy to read this book and feel for his plight, but it is also difficult to suffer the depravities he experienced. The artwork portrays this sense of ambivalence about childhood, drawn in the same accessible, clear, and picture-book manner as his other works. It is jarring to see "cute" figures as they navigate serious issues such as blatant discrimination, sexual abuse, and physical violence, but it is also emblematic of the sorts of circumstances many young people experience. It impresses the point that many of these situations force children to have to grow up well before they should, but at the same time they are still children. It makes the proceedings that much more distressing. I applaud the braveness here in candidly portraying such personal trauma and how he learned to cope.

One of the most powerful aspects of this book is Gill's instilling a sense of empathy for pretty much every character, reinforced with frequent reminders that children are sponges that absorb what is around them. He might portray bullies and abusers as monstrous, but he also constantly reminds that they are human beings who are the products of their contexts. This view is what eventually drives Joel's own realizations as he grows older and informs an important choice he made when he was just out of high school. It also makes this tale that much more poignant and difficult to ignore. Certainly there are many ills portrayed here, some systemic and others more personal. Gill smartly depicts the terms of the debate of how to best address these factors but does not come down with a didactic solution to what is a complex set of circumstances. He only writes about what has worked for him and his family. This book is excellent, at once moving, provocative, and thought-provoking.

All of the reviews I have read of this book have been positive. Publishers Weekly wrote, "Gill’s empathy for his younger self and the children he grew up alongside elevates his singular story into a passionate plea for neglected children everywhere." In a starred review from School Library Journal, Carla Riemer concluded, "Despite the heartbreak, Gill leaves readers with a message of hope—that anyone living with trauma can find a way out." John Seven opined, "Fights doesn’t feel like a story being told by a grown-up looking back, but a kid living it. That’s the power within it, it hasn’t lost track of the kid that the story is about."

Fights was published by Oni Press, and they offer more info about it here. This book portrays sexual abuse, violence, and profanity and is suggested for readers mature enough to handle those things. 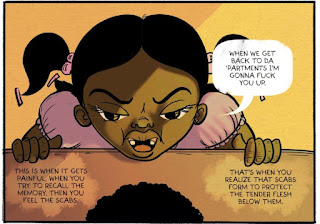