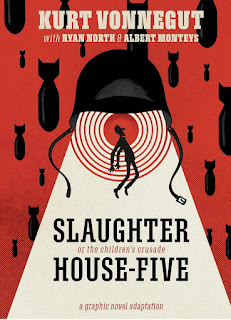 I should preface this review by stating that Kurt Vonnegut is one of my favorite authors ever. I have read every one of his novels, checked out many of his nonfiction essays, and laughed at his cameo in Back to School countless times. One of the high points of my college career was getting to hear him speak my freshman year. So, to say that I have high expectations for this book is a bit of an understatement. Beyond my own background, some of the weight of my expectations also lay in this book partly being adapted by writer Ryan North, a brilliant comics creator/humorist responsible for some of my favorite works, namely Dinosaur Comics, Jughead, and The Unbeatable Squirrel Girl.

For those who have not read the original novel, Slaughterhouse-Five is about a man named Billy Pilgrim who becomes "unstuck in time."  Throughout the novel he bounces back and forth across his own timeline, witnessing his death, marriage, experiences in World War II, abduction by aliens who placed him in an interstellar zoo, and meetings with literary hero Kilgore Trout, among other things. As a result, he takes a unique view of humanity, forming opinions about the capriciousness of war and societal values. 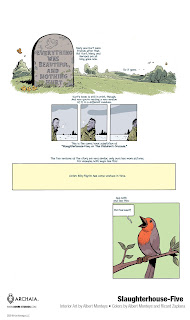 As you can see from the excerpt above, which opens the book, this adaptation takes advantage of its medium in ways that enrich this reading experience. The tweaks firmly entrench the book in its own historical context as well as the medium of comics, and they are done in very smart ways. This book uses some of the unique features of comics to recast and retell portions of the novel to convey its spirit without being a strictly literal adaptation. For instance, using panels to play with time and imagination: 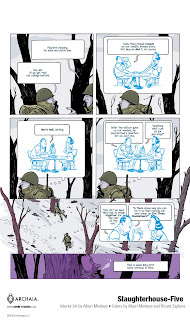 Or changing into a newspaper comics format to give short bursts of back story: 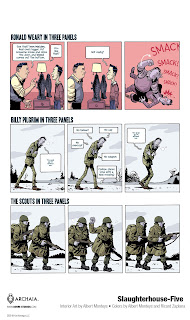 As you can see, it is almost as if this story was originally conceived to work as a graphic novel. Like its source material, this book is full of pathos, laughs, and dark observations about humanity. It's a witty, fantastically moving, and trenchant book. This adaptation is one of the best I've seen, in any medium, as much a classic as its source material. Perhaps this is faint praise, because most graphic novel adaptations do not take advantage of the affordances the medium allows. I wish I was not so surprised that reading an adaptation of a novel that hinges on continual shifts in time and space in a medium (comics) that constantly manipulates time and space is an excellent experience as this one. I feel that many creators, certainly not most literary adapters, do not take as much advantage as the medium as these ones do.

That the creators of this book have many years of comics experience under their belts should come as no surprise. North has won multiple Eisner and Harvey Awards for his work on Adventure Time comics, The Unbeatable Squirrel Girl, and Jughead. Artist Albert Monteys was art director of the Spanish satirical magazine El Jueves from 2006-2011 and also created the Eisner Award nominated science fiction series Universe! Both creators speak about their work on this adaptation in this interview, and Monteys shares his take in this interview.

All of the reviews I have read about this book have been raves. In a starred review from Library Journal Tom Batten praised it as "the best, and most effective, graphic novel adaptation of a literary novel in recent memory." In another starred review, Publishers Weekly called it "a rare graphic adaptation that enriches a literary classic." David Weber called it "a perfect graphic novel adaptation" as well as "an absolute joy to read."

Slaughterhouse-Five was published by Archaia, and they offer more info about it here.