Blades of Freedom: A Tale of Haiti, Napoleon, and the Louisiana Purchase 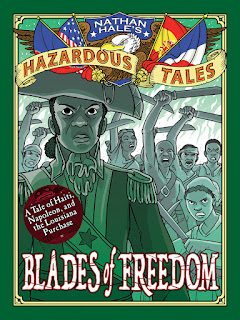 I have a lot of books on my to-read list, but I got this one in the mail the other day and it jumped to the top of the heap. I have reviewed every volume of Nathan Hale's Hazardous Tales on this blog (click the link and see!), because I think it's the best nonfiction history series available in graphic novel form. Each book has been excellent, full of well researched facts and events and told in a highly engaging, sometimes humorous way. It's one of the series I recommend most to tween and adolescent readers who have an interest in nonfiction. Blades of Freedom is the tenth book in the series, and it is phenomenal.

Bookended with a look at the Louisiana Purchase, it runs far and wide filling in the context for that pivotal happening. Over the course of this book, I read about how mosquitoes spread Yellow Fever, Columbus decimated the Taino people, vodou arose as a religion, Napoleon rose from being a Corsican to the Emperor of France, and Haiti became the first country in the Americas to abolish slavery. It's a book about the politics of the day, moving from monarchies to revolutionary times, using the French Revolution as a backdrop for much of went on. It explains how the slave trade work in gruesome detail, focusing on the value of sugar cane as a product of the Caribbean islands. It also focuses on major figures involved, including Napoleon, legendary insurgent Mackandal, rebel general Toussaint L'Ouverture, Emperor of Haiti Jean-Jacques Dessalines, and eventual US President James Monroe. 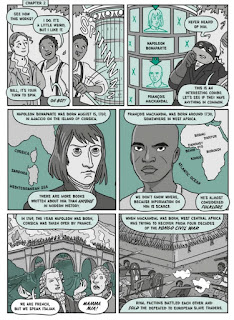 It manages to cover so many topics with a clever conceit: the narrator Nathan Hale has a wheel he spins to jump from topic to topic. This set-up keeps the narrative moving at a brisk pace without being overwhelming. It also sets up a context for building so much of the background necessary to understand these historical events. Personally, I knew little about the Haitian Revolution before I read this book, and after having read it I felt ashamed not to have known more about this landmark struggle. It was the largest and most successful slave revolt ever, and one of the big pluses of this book that it sheds light on a topic that I think gets short-shrift in terms of learning about history in the US. I think the lack of coverage is racist, with the long-held use of the Haitian Revolution being used as a specter to scare white people about the potential savagery of free black people. Having this matter being portrayed in such a popular series will mean that it won't be as arcane a topic going forward, I hope.

This book's author, Nathan Hale, who is not related to the Revolutionary War spy, is a highly accomplished graphic novelist. Aside from his great success with this series, he has also published a couple of fictional graphic novels One Trick Pony and Apocalypse Taco. He has also drawn a few others, including Rapunzel's Revenge and Calamity Jack.

Thus far, I have not been able to locate many reviews of this book, but the ones I've seen have been positive. Marissa Moss wrote, "This is the kind of history that will excite young readers and show them how disparate events, far from each other in time and space, can have major impacts on each other." Lori Henderson listed it as a weekly pick for Good Comics for Kids.

Blades of Freedom was published by Amulet Books, and they offer a preview and more here.