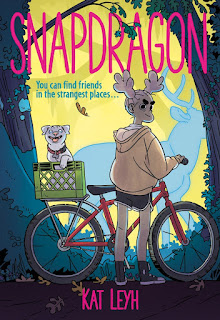 Snapdragon is one of the best books I've read in a while. It is about a brash, young woman named Snapdragon (named after her mom's favorite flower). When the book opens, she is looking for her lost dog Good Boy, and she braves going into the house of a woman purported to be a witch, because it is rumored that she eats pets. She does find Good Boy there, but he had been hurt and the "witch," whose name is Jacks, took him in and patched him up.

That may have been the end of matters, but soon afterward, Snap ends up with a bunch of orphaned baby possums so she turns to Jacks to help her raise them. Jacks agrees, but only on the condition that Snap helps her with "her work," which involves roadkill and taxidermy. The two form an unlikely friendship, and as Snap gets to know Jacks she learns that the old woman has connections to her family and also that she may well be a real witch. 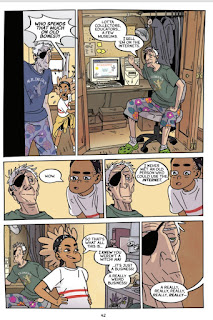 There is plenty of mystery, action, and intrigue in this book, but what makes it exceptional is its complex world full of realistic, well-realized characters. Snap and Jacks both feature strong personalities, but so do all the supporting ones, from Snap's put-upon Mom to her friend Louis, who shares her fandom for horror movies and likes to wear dresses and paint his nails. What is more, this book does an excellent job exploring the various relationships between them. Snap gets Jacks to open up about her past, and she stands by Louis in dealing with bullies and his rough-and-tumble older brothers. And not only is there a lot of strong emotional work, but as you can see in the excerpt above, this book is also frequently funny in its dialogue and pacing. There are parts, such as the sequence where Snap's mom goes to buy her an animal anatomy textbook, that made me want to cheer. This book is moving in many ways and also a joy to read.

This book was created by Kat Leyh, who is an artist and writer who is known for her work on the Eisner and GLAAD Award-winning Lumberjanes series and the graphic novel Thirsty Mermaids. She speaks about her inspirations for Snapdragon in this audio clip and her career in this interview.

All of the reviews I have read of this book have been glowing. Kirkus Reviews summed up their starred entry, "Sweet and fierce, this is a must-have." Ashley Dunne wrote, "It could be a good book for opening up conversations about respecting the earth’s creatures, normalizing the concept of trans kids and queer seniors, or just plain finding a fun story with witchy elements." Hillary Brown opined, "The star of the book is the way Leyh draws her flippin’ heart out to make a story that really doesn’t need words at all." Anna Schaeffer wrote that it "glitters with imagination, sweetness, and grit."

Snapdragon was published by First Second, and they offer a preview and more info here.