History Comics: The Wild Mustang: Horses of the American West 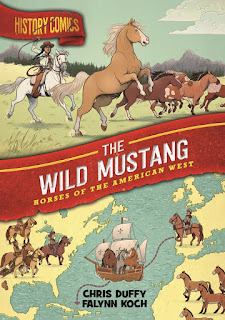 The History Comics series began last year, and I was impressed with the initial offerings. This volume, The Wild Mustang, lives up to the great start, featuring a wide range of history that touches on matters of biology, plate tectonics, politics, and culture wars. The story begins hundreds of millions of years ago when horses first evolved in what is now North America. About 150 million years ago, there were none of these creatures left there, as they had all migrated to other continents and were isolated by continental drift. It was only with the re-introduction of the Spaniards and other colonial powers that these creatures returned to where they originated. 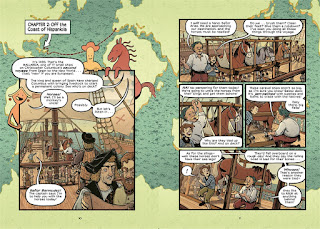 What I liked about this book was that it takes a long view of history but also makes sure to show how these animals were used for various social and political means. Aside from agrarian labor, they were used for war purposes, for the Spanish to conquer native people or the Comanche to dominate land and property. It counters a lot of the romantic thinking of some idealistic native species that embodies the spirit of the American West, showing how they have since propagated, been hunted and slaughtered, and later protected by various laws, many championed by Velma B. Johnston (AKA, Wild Horse Annie).

This book is dense with facts, but it is still very readable and engaging. Plus, there are plenty of resources for further information in the end papers of the book, making a great starting point for eager readers. I think it would be attractive to people who love horses but it's also good for a general survey of US history and a great model for what historical research focused on a specific subject can look like. The artwork captures the energy of the animals and also communicates many shifts in scenery and tone, from pastoral plains to meat packing plants to villages to courtrooms. It's a excellent text to teach about the complexities of history in an entertaining and relatable medium.

This book's creators, writer Chris Duffy and artist Falynn Koch, have created a number of other graphic novels. Duffy has written or edited a number of anthologies, including Fairy Tale Comics, Fable Comics, Nursery Rhyme Comics, and an anthology of World War I poetry titled Above the Dreamless Dead. Koch has drawn a couple of entries in the Science Comics series, Bats and Plagues, as well as a Makers Comics book about baking. Koch speaks about her work on this book in this interview.

The reviews I have read about it have been mainly positive. Kirkus Reviews called it "A surprisingly comprehensive history of wild horses." Brett at Graphic Policy called it "a little weighty at times" but "well worth it." As of this review, it has a 4.05 (out of 5) star rating at Goodreads.

The Wild Mustang was published by First Second, and they offer a preview and more information about it here.