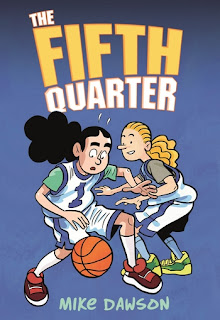 4th grader Lori Block LOVES basketball, and she is on her school's team, but she is not so good and only gets to play in the "fifth quarter" when things don't count. After getting a small taste of actual gameplay, she wants more and gets the opportunity to take part in some camps where she can learn more skills and practice. She is driven to succeed and relishes her opportunities, even though her desires come at odds with her friendships.

Lori's friends are not into basketball as much a she is, and at recess they rather play unicorns or four-square than shoot baskets, which causes her distress. She is also awkward at times and makes comments that are meant as jokes but get taken as insults, especially to her fellow "double-dribble twin" Sophia. So she has a lot to navigate in terms of her social world.

Adding to this mix is her family, which includes her mom and dad as well as her younger twin siblings, Jason and Becky. They are all depicted in realistic manner, with a plot following her mother's run for local political office (trying to do something to help the kids) against a smug incumbent, and her put-upon father trying to hold down the fort and keep the two little one's faces out of screens as much as possible. One of the aspects of this books I liked the most was how much space and respect was given to her family, who are important players in this story, which I find is not often the case in YA/tween graphic novels.

This book excels at capturing the excitement of the games as well as the variety of social and emotional dynamics. The relationship aspects of this book are complex and compelling, and I love how it captures the messiness/uncertainties of human interactions and growing up. Just check out this sequence from early on in the book: 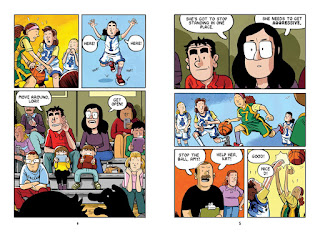 In terms of artwork, I think that the coloring pops and the facial expressions and gestures are economical and highly expressive. I found the Fifth Quarter to be utterly riveting and read it in one sitting. It's a very human and relatable book that I feel I will revisit multiple times. If there is any justice in the world, it will sell millions of copies.

I am a big fan of this book's author Mike Dawson. He has written and drawn a few graphic novels over the years, including Freddie & Me, Angie Bongiolatti, and Troop 142. He also has done a lot of  graphic nonfiction and essay work, including the collection Rules for Dating My Daughter and plenty of comics for The Nib. He speaks about his work on The Fifth Quarter in this interview.

All of the reviews I have read about this book indicate its high quality. Publishers Weekly wrote that it was full of "sincerity, humor, and strong character development." Kirkus Reviews gave it a thumbs up, concluding, "Nothing but net." Hillary Brown commented about Dawson's art style and storytelling, especially on how refreshing it was to see the adults portrayed as "real humans, dealing with their own shit."

The Fifth Quarter was published by First Second, and they offer a preview and more information here. It is also the first of a series, and I am eager to see more of these characters and their lives.