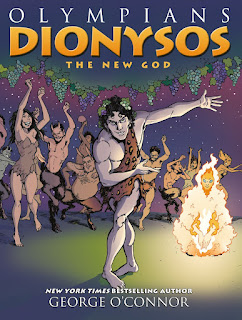 Dionysos: The New God is the last book in the 12-volume Olympians series that chronicles the major gods and goddesses of Greek mythology. The whole enterprise is narrated by Hestia, the first-born child of Rhea and Cronus who eventually gives up her spot in the pantheon to Dionysos, and she gets her due as well. 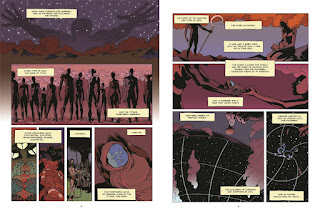 In many ways this book is the most straight-forward of them all, with the tales mostly following the main character with few tangents into related myths. Still, it is both highly engaging and informative, telling a tale about a god that shares many aspects with modern religions.

This book is rewarding as a stand-alone volume but it is also a clever send-off to the entire series, full of subtle references to past tales and characters. Dionysos differs from the other gods because his mother is a mortal woman and he grows up on Earth rather than Olympus. His early life is full of chicanery, as he was initially female and lived as a daughter raised by his mother's family before he transformed into a male and moved in with a band of satyrs. Along the way, he invented wine and became a god of celebration, fertilty, and madness.

Dionysos is imbued with unique characterization, reflecting a complicated trajectory of life. He straddles multiple categories, such as immortal/mortal. female/male, and joy/madness, and his depictions, with two colored eyes, is appropriately beguiling. The flow and storytelling of this book are also superb, and I feel this book is a more than worthy coda to an excellent series. I am really looking forward to what O'Connor does next, which will be a four-book series entitled Asgardians, which will retell Norse mythology.

In addition to the Olympians series, artist/writer George O'Connor has created the American history journal account Journey into Mohawk Country and the dystopian future book Ball Peen Hammer, written by Adam Rapp. He also drew the political graphic novel Unrig: How to Fix Our Broken Democracy with author Daniel G. Newman. He speaks about his work on this last Olympians book in this interview.

All of the reviews I have read of this book have been glowing. In a starred entry, Kirkus Reviews summed up, "A by turns epic, amusing, and tragic caper that’s even more toastworthy (for obvious reasons) than its 11 predecessors." Bill Capossere wrote about it and the whole series, "They’re a treasure for all,  young or old, steeped in the stories or barely recalling them from high school."

Dionysos: The New God was published by First Second, and they offer a preview and more here.