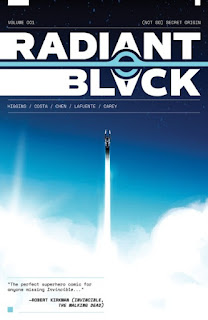 I have read a lot of superhero comics in my days, and Radiant Black is a very good one. I like how it plays with common tropes and makes them fresh and exciting. To start, it stars a man named Nathan Burnett, who is not the typical alter ego. To begin, he's relatively older, a 30-year-old white man who is a struggling author, has racked up substantial credit card debt, and is forced to move back in with his parents. While he feels humiliated to be back in his hometown just outside of Chicago, his childhood friend Marshall is thrilled to see him and also give him a healthy dose of grief. One day, while they are out catching up and drinking, Nathan encounters some strange mini-black hole/ball of energy and is transformed into a helmeted, super-powered being. 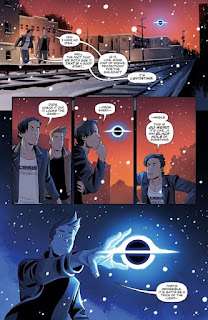 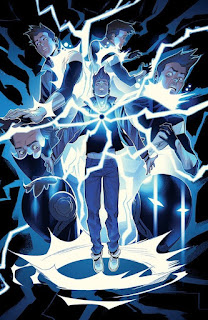 Of course, he decides to use his powers for good, but things become complicated by the mystery of what gave him his powers and also the growing realization that he is not the only one in the world who has been so gifted.

What made this book work well for me was its character work, suspense, and plotting. Nathan makes for an intriguing hero and Marshall is much more than a comedic, smart-ass sidekick. Their relationship is makes for fun reading, as does how well the details of Radiant Black's origin are teased across the length of this book. Add some genuinely surprising plot twists, and the result is an engrossing, addictive, and fun series. I will definitely be checking out more of it.

Radiant Black was created by writer Kyle Higgins and artist Marcelo Costa. Higgins is best known for his comics work on Batman and Mighty Morphin Power Rangers. Costa also worked on Mighty Morphin Power Rangers as a colorist. In the later chapters of this trade paperback, they are joined by guest artists Eduardo Ferigato and David Lafuente. Higgins and Costa speak about their work and inspirations for this book in this interview.

The reviews I have read about this collection of the series' first six issues were mostly positive. Henry Varona called it "already one of the most immersive and exciting superhero comics of the decade." Kris wrote, " If you grew up reading comics or watching the TV shows the creative team is riffing on here, then you’ll likely enjoy the series." Colin Moon was not thrilled with the first four chapters of the book, but opined, "For all my griping — and all the spinning of the book’s wheels — the final two issues of this collection reignited my excitement, making me much more willing to join the adventure in progress."

Radiant Black was published by Image Comics, and they offer a free preview and more about the entire series here.