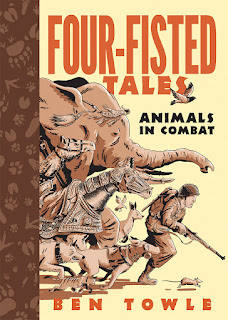 Four-Fisted Tales is a highly entertaining and informative book that taught me all sorts of things about animals in combat. Apparently, the US military has been using dolphins for all sorts of missions (allegedly, because lots of info about it is classified) for decades. Among the many things I also learned from this book are that World War I soldiers marshaled fireflies to help create natural light at night that did not give up their positions, rats can be trained to be highly effective at detecting land mines, and slugs were used to protect soldiers from mustard gas. Also, there are fascinating stories about animals like dogs and bears that not only served as mascots for specific units but also got involved as actual combatants. Truth is truly more fascinating than fiction.

What really makes these tales work is the masterful artwork that portrays various species not only with accuracy but also feeling, as well as detailed depictions of vehicles, buildings, landscapes, and other realistic features that make the environs of each panel live and breathe. Consequently, Four-Fisted Tales invites multiple re-readings, as it is easy to breeze through the whole book due to its fascinating subject matter and clear storytelling, but it also features intricate artwork that can be pored over again and again. Additionally, the war stories are compelling in and of themselves, without sugar-coating so even the more whimsical tales remind readers of the grim realities of battle.

This book's creator Ben Towle is a professor of illustration at The Columbus College of Art and Design. He has been nominated for 4 Eisner Awards, and is known for comics that tell fantasy tales, like Oyster War, and others that are nonfiction graphic novels like Amelia Earhart: This Broad Ocean. He speaks about his work on Four-Fisted Tales in this interview.

A 2022 Eisner Award nominee for Best Publication for Kids, this book has been well-reviewed. Rob Clough wrote, "Towle tells stories that are cruel and absurd as well as frequently funny and even inspiring, and it’s important to acknowledge that it’s all part of the war experience." Greg Burgas opines that it illuminates "a neat aspect of a depressing part of history – war ." Publishers Weekly called it an "undeniably captivating book."

Four-Fisted Tales was published by Dead Reckoning, and they offer more information about it here.

I had the pleasure of getting a copy of the book from Towle at HeroesCon this past weekend. He drew a lightning bug in my copy, and he is a swell fellow! 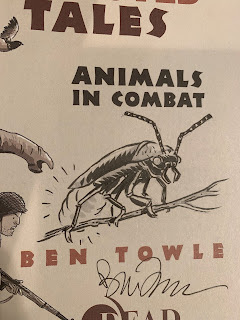