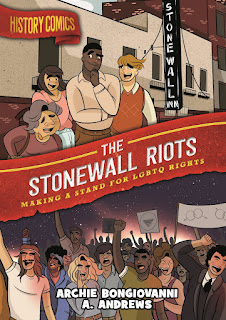 History is a tough thing to conceive of for some learners, as it's difficult to remove oneself from one place in time and try to imagine themselves in another. This volume of History Comics, The Stonewall Riots: Making a Stand for LGBTQ Rights, tackles this issue by literally having its protagonists, a trio of adolescents named Natalia, Jax, and Rashad, who are diverse in terms of gender and sexuality, go back in time (without their cell phones, the horror!). Then and there, they are witness to the actual events leading up to the Stonewall Uprising, and they get to know some of its major players. 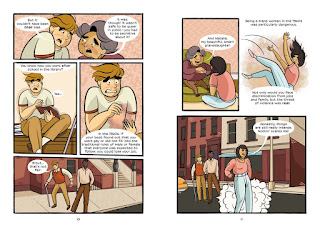 This graphic novel is more about getting to know a tone and people than it is about presenting specific facts and dates to memorize, and I think where it excels is in contextualizing what led to this series of protests that gave momentum to a significant push for LGBTQ rights. The artwork is full of personality and depicts characters in stark, energetic fashion, pairing well with the plot to make this book have a very human focus. The characters and readers both get well acquainted with the people who made history.

Significantly, this book also does not sugar-coat the people or events, nor does it conclude that the struggle is over in the present day. In fact, it points out how much work still needs to be done and also provides a slew of resources for how young people can also get involved in various organizations today. It is a fantastic resource for learning about history as well as for encouraging contemporary activism, and I think it is a much-needed book for classroom and school libraries.

The Stonewall Riots was co-created by writer Archie Bongiovanni and artist A. Andrews. Bongiovanni has co-created comics in all sorts of formats, from graphic novels like A Quick & Easy Guide to They/Them Pronouns to webcomics like Grease Bats and other shorter ones published at The Nib. Andrews also has created a number of different sorts of comics including A Quick & Easy Guide to Sex and Disability.

All of the reviews I have read of this book have been positive. Brett at Graphic Policy stated that it is a great primer that "captures the moment," "the feel," and "the build-up of it all." Krystal Moore and Felix Whetsel called it "a timely introduction to the history of the LGBTQ community, and the people who fought to get us where we are now." Kirkus Reviews summed up, "Engaging account that invites young people to continue to advocate for equality now."

The Stonewall Riots: Making a Stand for LGBTQ Rights was published by First Second, and they offer a preview and much more here.